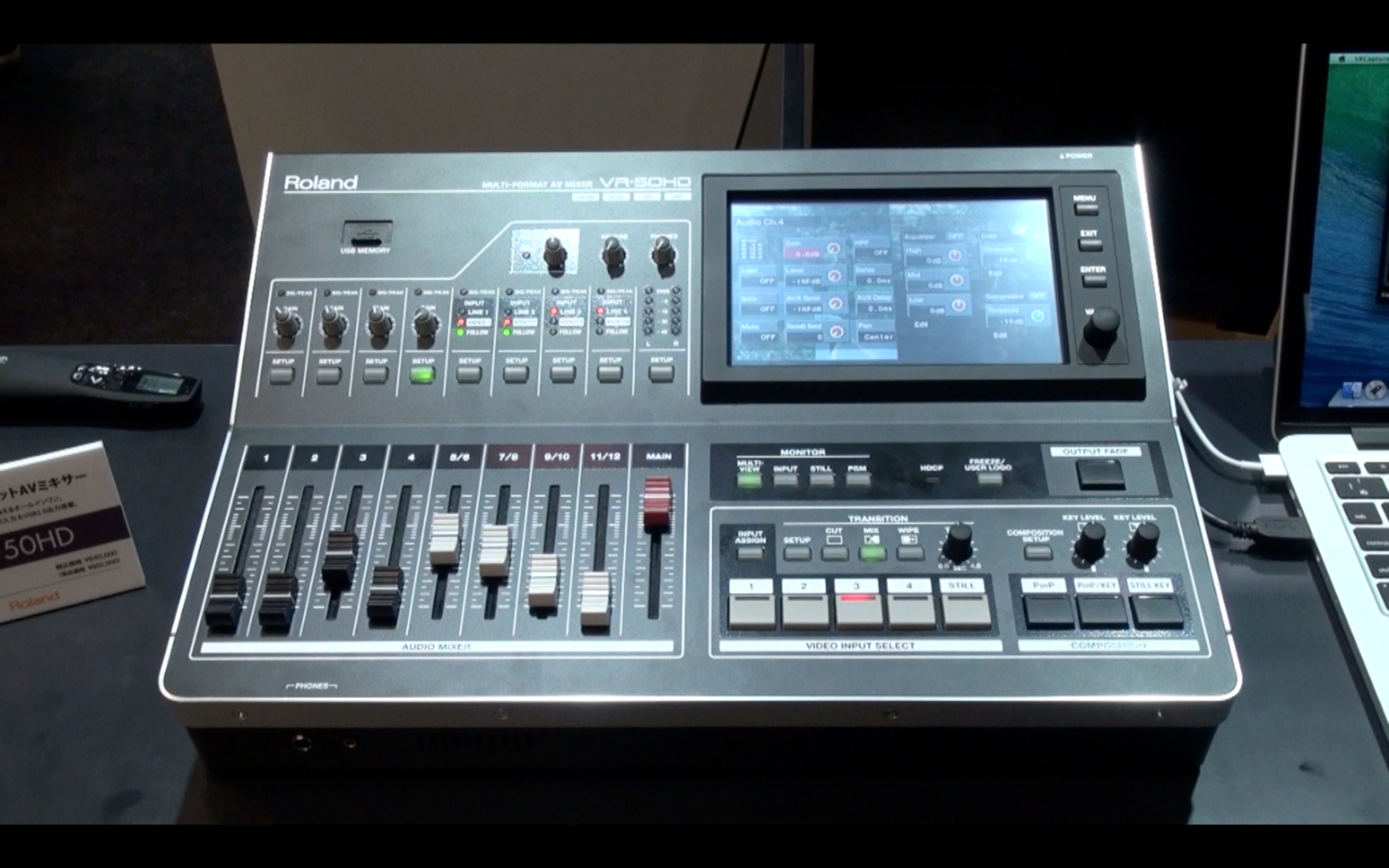 At the latest Inter BEE, Roland (Room number 4616) is showing its wares at a booth that brings together a wide range of tools from its pro audio and video/broadcasting lineup in a single space. In addition to announcing its latest high-end addition to its audio recorder lineup, the AR-3000SD, and its new multi-format video presenter, the PR-800HD, Roland will be showing its VR-50HD multi-format AV mixer, newly announced this June. Also on display is the VC-1-SC, a new scan converter in a small size. The booth plays hosts to a range of tools suitable for event production, facilities use, recording, editing, and more.

■ Roland announces its new upper-tier audio recorder
Roland is using Inter BEE 2013 to announce the AR-3000SD audio recorder, the company's latest high-end addition to its AR Series. The AR Series is used at shopping facilities, train stations, airports, event halls, and other spaces. The unit is expected to go on sale in April 2014.
This recorder retains compatibility with Roland's existing models while offering increased functionality and audio fidelity. The onboard programmable timer function allows for scheduled management, letting users schedule playback of background music and planned broadcasts at specific times. The unit supports uncompressed 24-bit/96kHz Wav audio, with an SD/SDHC card slot offering storage for up to 4,000 files. The unit also comes equipped with an ethernet port for online functionality, such as remote setup and maintenance via a web browser, setting the onboard clock to the correct time through an NTP client, and management and data forwarding over a network.

■ Roland announces its new multi-format video presenter
In addition, Roland will be using Inter BEE 2013 to announce the release of its PR-800HD multi-format video presenter, which offers high-fidelity video for sporting events, music concerts, exhibitions, and other venues where video content is deployed on large-format screens. The unit is planned to debut in Spring 2014.
Offering hi-fi video playback, the PR-800HD features dedicated onboard hardware that allows for simultaneous SDI/HDMI output of uncompressed 1080/60p progressive video. The Quick Response Playback feature delivers video exactly timed to the video venue -- playback begins within 0.1 seconds of pushing the button. This lets users start video playback at a music concert or other event requiring moment-to-moment precision. The device can also be linked to two or three screens, and it supports large-format LEDs like those used at exhibit halls, permanent installations, stadiums, and other venues.
Equipped with two SSD slots, the device allows the end-user to deploy two standard SSDs simultaneously for uncompressed 1080/60p recording and playback.

■ The VR-50HD multi-format AV mixer
Newly announced in June of this year, the VR-50HD is a multi-format AV mixer offering 12-input, four-channel video, with 3G, HD, SD-SDI, and HDMI inputs and USB 3.0 output. The unit can be tied to professional-grade HD cameras, computers, Blu-ray devices, DVD players, and video cameras with composite out. Output is designed for HD recorders using 3G, HD, SD-SDI, and HDMI. The USB connection allows for live streaming and recording over a computer interface.
Video input can be automatically adjusted to the optimal resolution with the scaler feature, while the four-layer compositing feature lets users mix a total of four video feeds into one. This allows for picture in picture, subtitles, or still images read in via USB to be overlayed over the main stream. In addition, the mixer is equipped with a large-format 7-inch touch monitor for intuitive control. The screen splits into seven views for simultaneous, real-time checking of the four video inputs, still images read in from a USB disk, compositing, final output, and more.

■ VC-1-SC Scan Converter
The new VC-1-SC scan converter is an up/down/cross/scan converter with SDI/HDMI output that features a built-in FS (frame synchronizer) and can freely convert signals to analog formats like PC-RGB and composite, in addition to digital signals like SDI and HDMI.
Inputs supported are SDI interfaces like 3G, HD, and HDMI, RGB/component, and composite. Output is offered in 3G, HD, SI-SDI, and HDMI. With a built-in scaler and FS, the unit provides stable up, down, cross, and scan conversion, quick framerate conversion, I/P conversion, and aspect ratio conversion. Modes are selected via the unit's DIP switch or by a controlling PC tethered to the device via USB.

Finally, in the pro audio category, Roland is showing its M-480 and M-200i digital mixers and REAC products, a suite designed for digital voice transmission. In the video and broadcasting equipment category, the company is showing its VC-1 series of video converters.