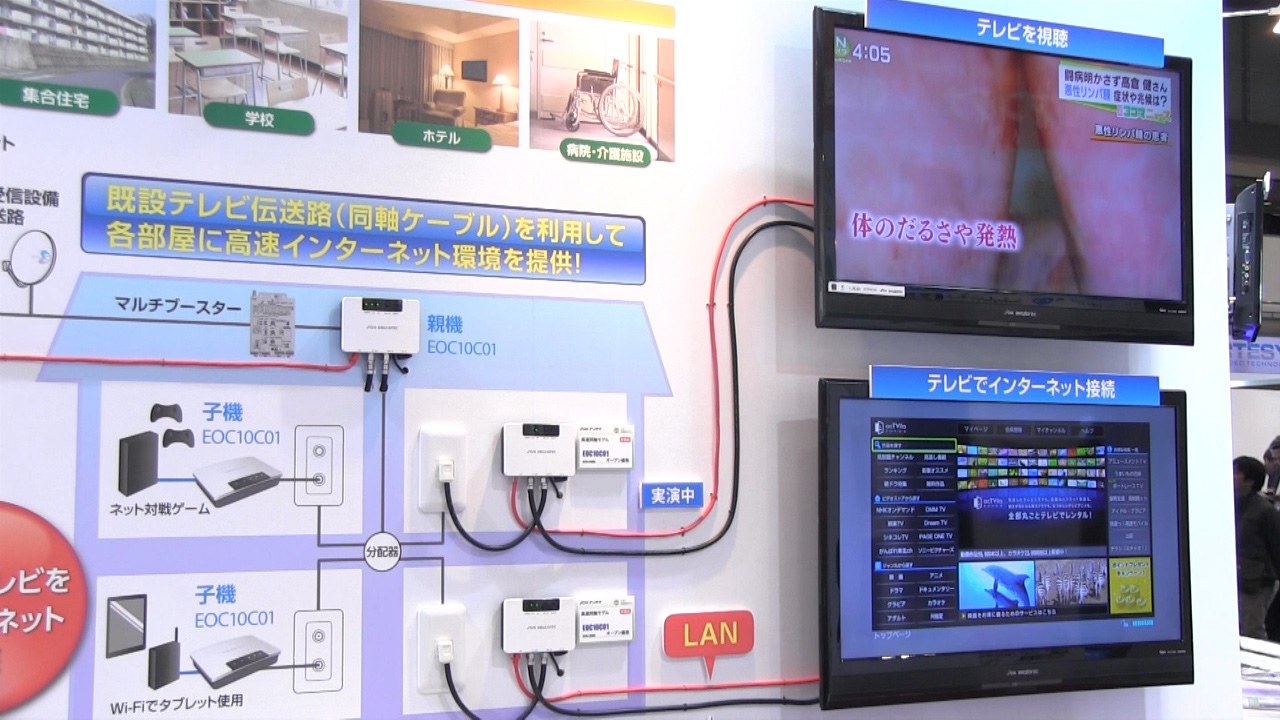 - Proposal for IPDC Disaster Information and Public Information Transmission Systems
On the main stage, a proposal for a next generation data transmission platform was demonstrated, a transmission system whereby information such as that relating to disasters, public interest, and others can be transmitted to households, businesses, and public institutions. They proposed a potential transmission system that uses CATV cable networks or radio waves utilizing their DX media Server “DMS10B1” and 64QAM modulator (with SI-MUX) “DEM200.”

In the booth, an example of a disaster information transmission system which would transmit news from Kyodo News was introduced; information received by a DX media gateway, “DMG10Q1,” would be transmitted and displayed as signage on television screens.

Mr. Takayuki Kawahata, the section manager of the sales planning section of the integrated sales department, had the following to say about emergency transmissions: “When emergency information is sent, the television screen will immediately switch to a message relating to the emergency situation, such as earthquakes. In the same way, this can also be applied to other closed systems, such as in hospitals, public welfare institutions, and schools, to display relevant information.”
The DX Media Server, “DMS10B1,” receives all types of public information, and can transmit them to specified destinations using IPDC. It supports information such as J-ALERT (the nationwide instant alerting system), disaster information from Public Information Commons and emergency emails, local information such as electronic pamphlets and electronic circulars from shopping centers and autonomous bodies, news, and signage and shopping information.

- Exhibition of “EOC10C01” Modem, Connect to High-Speed Coaxial Internet with Pre-existing Television Coaxial Cables.
A modem for building an IP network using pre-existing television coaxial cables and made for buildings, such as small apartments, schools, hospitals, etc., where line installation work is difficult to carry out.

Its special feature is that it can transmit by multiplexing the television and internet signals on a single coaxial cable. Capable of speeds of up to 240 Mbps, and a range of 2 km. It is available as both a main and auxiliary unit.