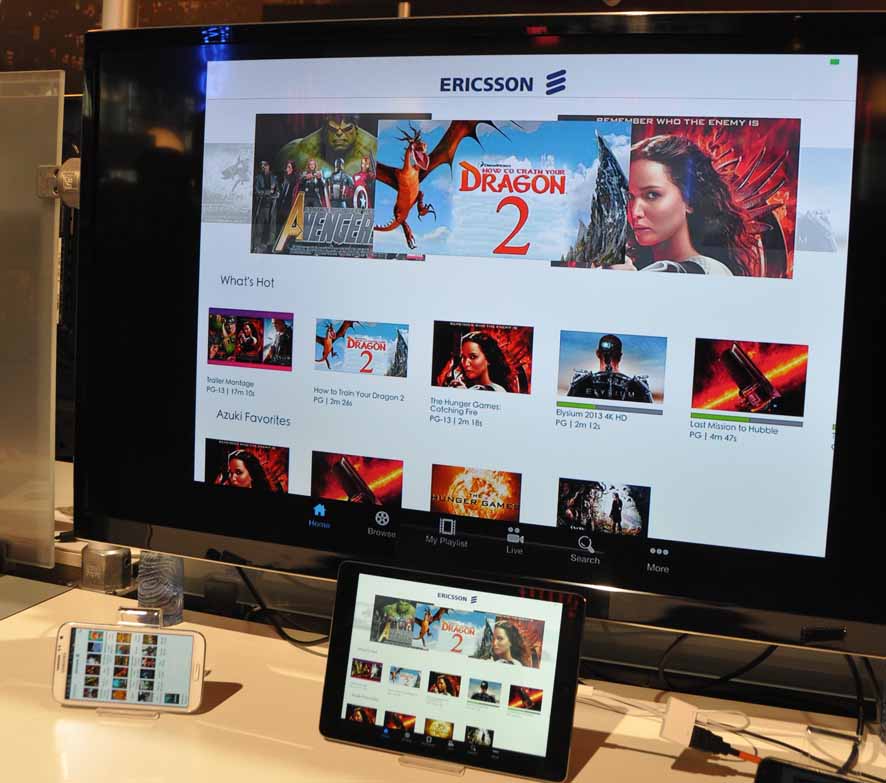 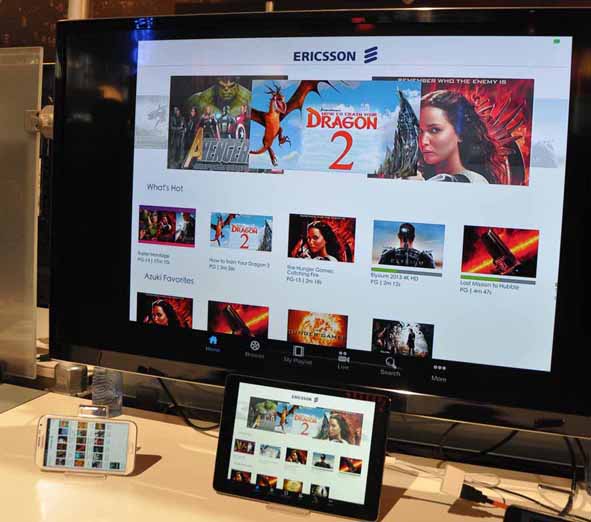 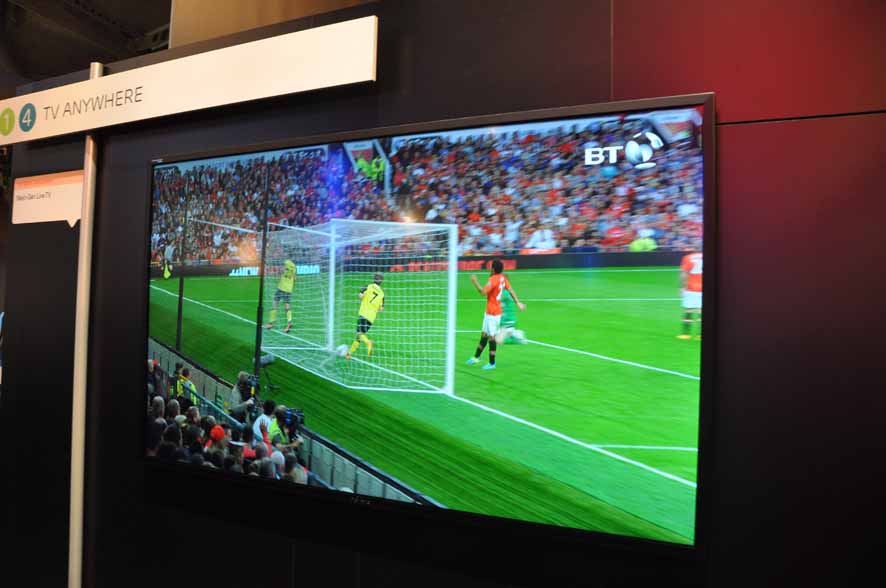 A demonstration of TV Anywhere displaying 4K video was also shown at the MWC Ericsson booth. 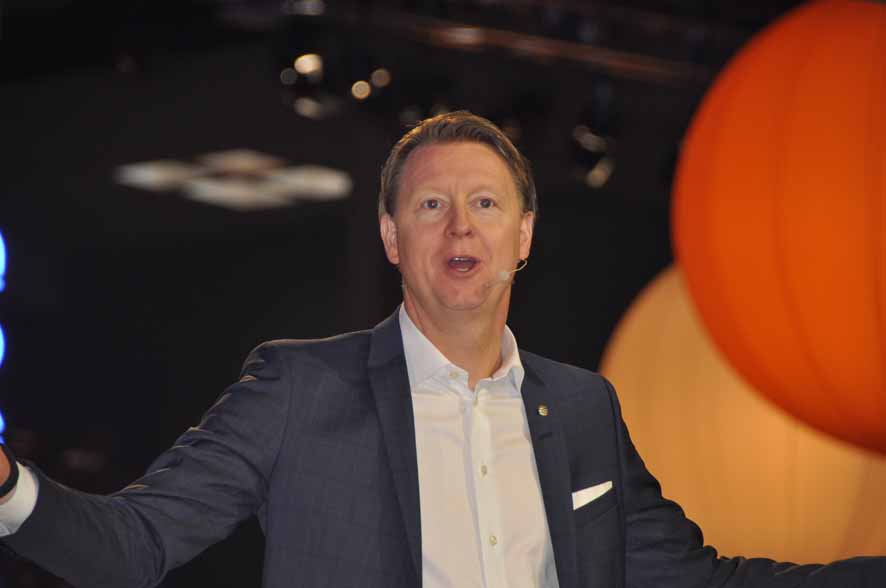 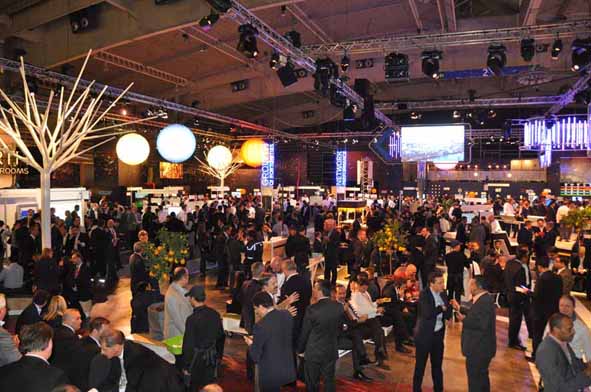 Ericsson Japan will participate in the InterBEE 2014 exhibition, held at Makuhari Messe in Chiba from November 19th (Wednesday) to the 21st (Friday), at the Moubic booth (booth number 5311). The company will be presenting demonstrations of their video delivery solutions and 4K video content delivery.

- Ericsson's "TV Anywhere" gains worldwide attention.
"TV Anywhere" first attracted attention when it was shown this February at the Mobile World Congress (MWC) in Barcelona, Spain. The service allows customers to view the same content whether on their living room TV or their smartphones. Broadcasters and PC companies have discussed the concept of such a service many times before, but what makes this platform new is the fact that it is a product by a telecommunications company.
"TV Anywhere" allows TV programs to be recorded to a cable company server and transmitted as a replayable video file to a specified device. Similarly constructed services have existed for many years now. The big differences are that the equipment (system) is being provided by a telecommunications equipment company, and recording occurs at the cable company itself. By using a smartphone or mobile tablet as a viewing device, users can now take their television with them everywhere. This service applies to not only currently broadcast content, but previously recorded programs as well.
Most "view anywhere" services up until now were recorded to a set-top box at the viewer's home, using an Internet connection to transmit the content to the viewer's location. This type of service is a closed, one-to-one system navigated by the end user. Once content is recorded to the set-top box's hard drive, it is apportioned for the viewer's personal use.

The "TV Anywhere" system unveiled by Ericsson this February uses headend (station side) recording. This type of recording has existed previously. However, in conventional terms the headend facility would lend storage space to the user, and content was recorded for individual private use. "TV Anywhere" takes this one step further. Multiple users can record the same content, yet there is only one common file. This allows for lower storage device and transmission costs.
The technology used in TV Anywhere was developed by Azuki Systems in the USA. The company was purchased by Ericsson in February. An Azuki Systems representative emphasized the benefits of lower costs thanks to a simplified system, leading to increased viewership, and therefore overall higher profits for all parties. "We understand that the management of rights and claims are changing. But having each individual viewer manage storage space is wasteful. The owners of content are now coming around to a more realistic point of view."
At the presentation hall, in response to journalist inquiries, Ericsson CEO Hans Vestberg expressed a proactive approach to the future of the broadcasting industry. "Ericsson must cultivate new customers from outside the realm of our traditional client base."

- Providing quality on par with TV through the Internet, and meeting broadcast standards with Japanese language support.
In regards to the quality control mentioned in point 1, Kogure stressed the company's commitment to quality: "When turning on the power and pressing a channel button on the remote, programs should instantly be accessible. TV Anywhere makes this kind of operability and speed a reality." He also mentioned, "we feel it is important to provide an environment in which the user can easily access the content they wish to view. Content should appear instantly after being selected, and viewable to the end without interruption."
In regards to the viewership tracking methods mentioned in point 2, he contrasted new methods with those of existing TV viewership rating systems. "With conventional television, measuring viewership rates relied completely on third party research. TV Anywhere's network allows concrete measurement of where and what the user is viewing, and for how long they are viewing it. And also, it becomes possible to receive feedback directly from viewers.”
Kogure also hinted at additional new developments based on viewership trends. "By having viewers register profiles (with information including age, sex, and hobbies, etc.), we make it possible to broadcast commercials matching that specific viewer. This will allow evaluation methods in commercial marketing costs to change. It will also be possible to analyze collected data, and use it for other marketing purposes."
Finally, regarding point 3, he stated, "through partnership with several domestic corporations, our company’s solutions will be adapted to be optimally compatible with Japan's unique technical usage requirements (including compliance with ARIB specifications, IPTV-Forum specifications, and the Telecommunications Business Act, etc.). Additionally, for viewing devices such as tablet PCs and smartphones, application user interfaces will be adapted into Japanese."

- Developing solutions on a global scale.
In closing, Kogure expressed his strong commitment to Ericsson’s success. "We have end-to-end solutions encompassing content creation, video transmission, broadcasting, communications, and content delivery, in order to realize an entire video-related ecosystem.” In regards to services offered by other companies, he stated that "they have hit a wall when it comes to costs related to frequency of use, profitability, and operations. This problem is occurring not just in Japan, but overseas as well. Ericsson has the track record and experience to develop global-scale solutions here in Japan, and we have the preparations in place to do so. Ericsson plans on responding to diverse customer needs on an individual basis.”