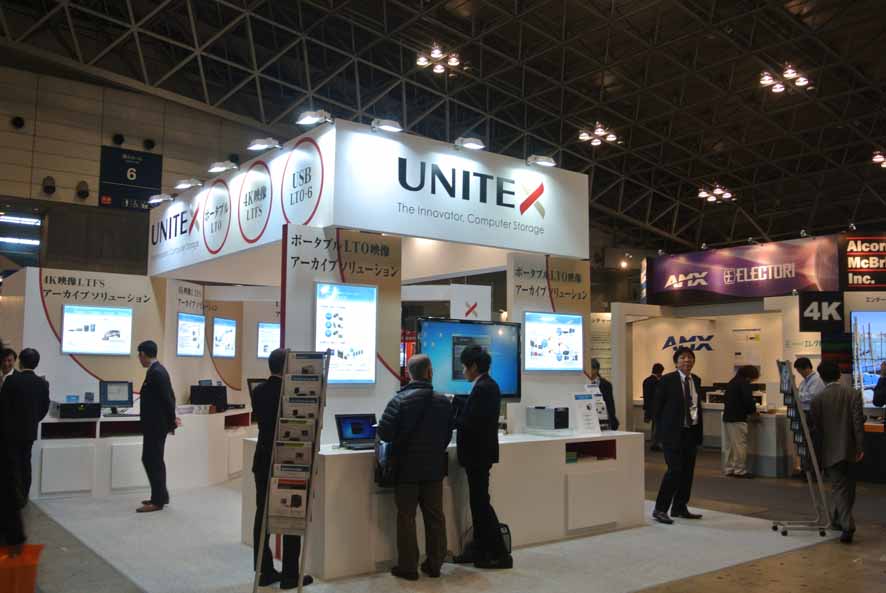 Unitex (Booth 6205) unveiled for the first time their portable LTO video archive system (top photo), equipped with four USB 3.0 ports that make it possible to connect memory readers and LTO-6 drives that have a USB 3.0 interface and are compatible with LTFS for Mac OS X and Windows.

As video production moves from HD to 4K, the increasing amount of video data at filming locations demands efficient utilization of expensive memory cards. Currently, recorded video data is usually taken to a nearby hotel or back to the office to be transferred from memory cards to internal or external hard drives, after which memory cards are wiped and reused. However, efficient utilization is difficult because data storage at filming locations can be burdensome due to the need to handle each memory card separately, while sending data to the office to be saved takes time and effort, and transferring to external hard drives carries the substantial risk of data loss from trouble during transport.
Unitex, drawing on their experience as the first company in the world to develop an LTO tape module with a USB 3.0 interface, has developed a portable LTO video archive system with easy operation that enables bulk archiving from memory cards to LTO tape of 4K video data at the filming location.
Seiji Uesaka of the Unitex Software Development Department remarks, "We are the only company in the world selling USB-compatible devices for this type of system. Previous systems required such complicated operations that it wasn't even possible to sleep at 4K filming locations. In the new system, we thought about the needs of on-site technicians and created an environment that enables more efficient work. We hope that customers needing a 4K archive solution will use the system." At the exhibit they were using an actual unit to clearly explain the device's advantages.

■Reduce the risk of video data loss
The new Handy LT, using the included Unitex TapeViewLT archive software, can consecutively archive data from up to four memory cards in LTFS format with only a single operation. There is no need to deal with each memory card separately, leading to shorter work times. Additionally, it is possible to simultaneously archive to LTO tape and external storage and verify the archived video data is exactly matched with the original. The danger of video data loss is reduced due to LTO tape's resistance to impact during transport.