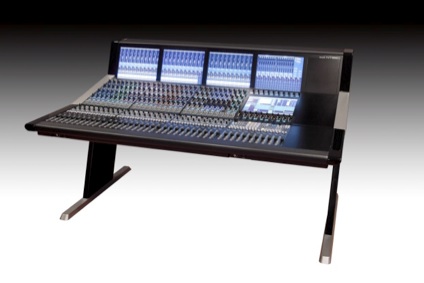 Tamura Corporation (Professional Audio Division, #4405) will be exhibiting audio and wireless devices developed for television channels and broadcasters. The main items of this exhibition will be its flagship NT880 model digital audio mixer high-quality audio system, and its digital wireless intercom that can play a vital role in the construction of any intra-station communication system.

■In addition to an improvement in sound quality, the NT880 sees an increase in safety and operability over previous models, and its competitors.
The new NT880 digital audio mixer enables high-speed audio processing, supported by the TR-NET high-speed data transmission protocol developed by the Tamura Corporation. The audio I/O unit and the audio processing unit are connected, allowing the NT800 to achieve low latency and an improvement in sound quality through high-speed data transmission. Additionally, through high-speed multiplex communication, it is possible to execute audio, synchronization signals, and control communication through a single optical line, leading to a simplifying of the system.
Safety has also been improved. The power and communication paths of all units in the system are duplicated. In the event that the main system fails, the system can be instantly switched to the backup system. Broadcast live without worrying about the unpredictability of live broadcasting. In addition, the system supports hot swapping. Every unit in the system can be changed with the power on, thus improving maintenance.
The NT880 also features high operability. With two HA/Trim and Pan dedicated encoders, and 12 function switch encoders, the NT880 can be configured for intuitive operation. Even when operating large-scale systems or systems with multiple operators, all of the necessary operations such as monitor source switching, input matrix switching, and scene recall can be carried out by hand. The new NT660, which employs the same sound processing system as the NT880 but with a more compact surface area, and 3 portable mixer models, the AMX-08, AMX-012, and AMX=12D, will also be on display.
■Wireless devices with high-quality audio and high usability.
Compact digital wireless intercoms that feature high audio quality and remote control channel configuration models, and wireless microphones with simple operability, will also be on display.
The remote control channel configuration model wireless microphone receiver is equipped with a built-in amplifier and antenna tuner, and can be easily set up. The microphones can be operated while inside a pocket.
In addition, the microphone channel is automatically set to match the receiver channel. Up to 15 channels can be set up in one room. The new digital wireless microphones can be used in the same way as traditional analog wireless microphones while taking advantage of the improved anti-interference and anti-concealment features, and realizing multichannel, high-quality sound. This system was released earlier this year and has already been successfully deployed in a variety of markets.
The one-way directional digital wireless intercom uses the basic technology of PHS that was developed for the digital mobile communication technology of the second generation cordless telephone system. This system achieves the uniquely clear sound of digital communication and stable channel utilization. The standard connection length for this system is 150m, but the optional CS control unit (for long distance) enables connection up to 800m.
Furthermore, a FM70MHz band send back system scheduled for release in 2013 is planned for the exhibition.

【InterBEE 2012】
Inter BEE is an 'Audio, Video, and Communications Professional Exhibition' that brings together top-level national and international broadcast, video, audio, and lighting equipment, IPTV, Mobile TV, cross-media, and peripheral application and solutions under one roof. The exhibition is an opportunity for those involved in media to learn about the latest trends in the creative and media business. Inter BEE will be held at the Makuhari Messe November 14 (Wed) - 16 (Fri). Admission is free.