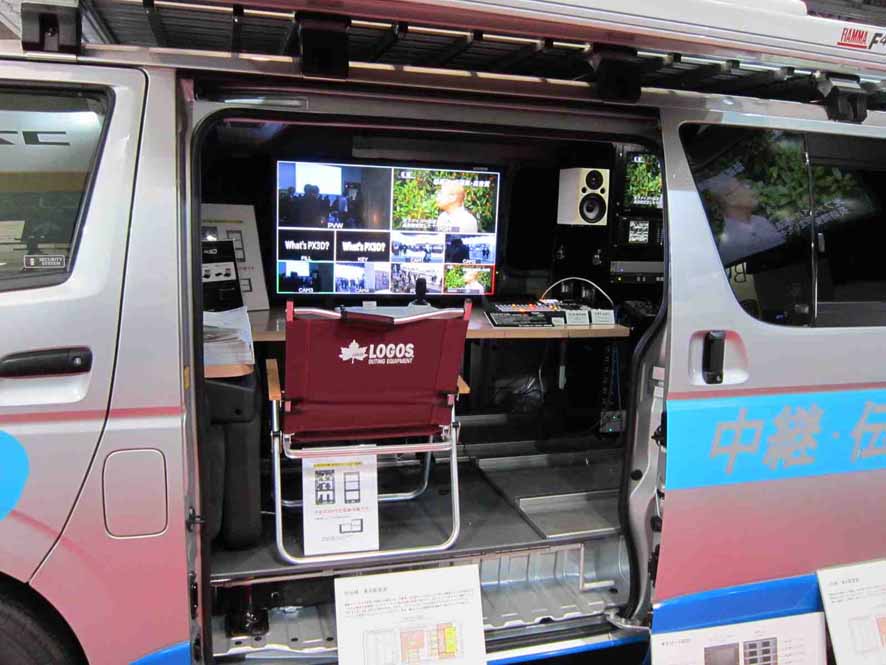 The main bay of the vehicle 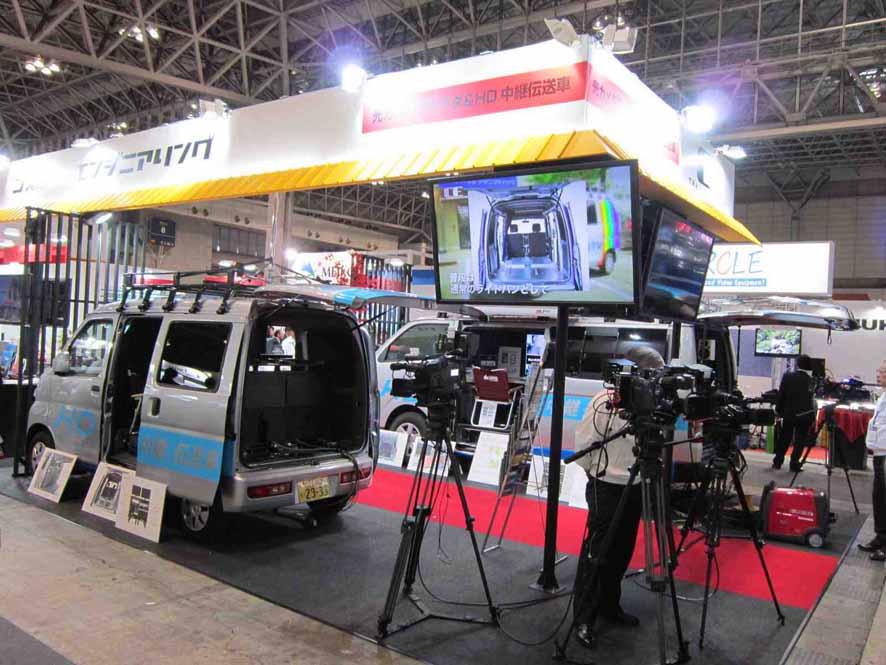 A view of the booth

Cosmic Engineering (booth 7204) is demoing a range of products aimed at streamlining the process of live broadcasting, TV production, and delivery. One head-turner is its small-format vehicle for live HD broadcast and delivery. The vehicle's internal layout can be rearranged as needed when in transit and on location. The company's booth features an actual auto-carry vehicle equipped with the system, letting visitors see how it is actually setup. Live demonstrations are also being held.

■ Use to transport equipment or to stream footage live on location
The biggest feature of this small broadcast vehicle is its patented (2013-183624) movable rack system. The rack is outfitted with a series of rails that make transporting gear and loading equipment easy. A booth rep explains, "You can use the system to transport equipment and then easily change the car's layout on location to suit your needs."
A major advantage to this system is that gear can be loaded directly onto the movable racks, meaning no specialized mounting equipment is needed. In addition, setting up and connecting equipment on location is done by way of the array of provided outlets situated behind the racks. In this sense, the vehicle is expressly designed to make work easier.
Power is drawn from a generator. Since today's equipment is increasingly eco-friendly, a small generator will do the job -- however, buyers can also request inclusion of a 6kVA generator that draws power from the engine. The minimal power output keeps heat levels down, meaning using the car's on-board A/C system is more than enough to keep the workspace cool.

■ Leverage your existing assets to deploy a low-cost live broadcast solution
On-board equipment is also robust: an eight-channel (expansible to 12 inputs) HD switcher is provided. This lets the user install six cameras, a pole camera, a character generator, video player, and more. Twelve microphone inputs are also provided.
The system uses fiber-optic cables by default for data transfer. "Any small-format HD camera can be deployed as the main system camera, so clients can use their existing camera setups in conjunction with our technology," explains a booth representative.
Outbound delivery can be set up with fiber-optic, IP, or 25GHz-band wireless output, enabling real-time delivery from on location. "Our last product, released last year, featured this movable rack system in a vehicle with support for up to four cameras. This latest iteration allows for a maximum of six, opening up new possibilities." (Booth rep)
The system can also be used with an existing vehicle and is priced at ¥30M for the complete set sans vehicle. The company's previously-announced 4-camera live broadcast vehicle is already in use by TV networks and other producers.

[Correction] A previous version of this article contained errors concerning past use cases for this vehicle. We extend our apologies to those concerned. --Inter BEE Online Editorial Department