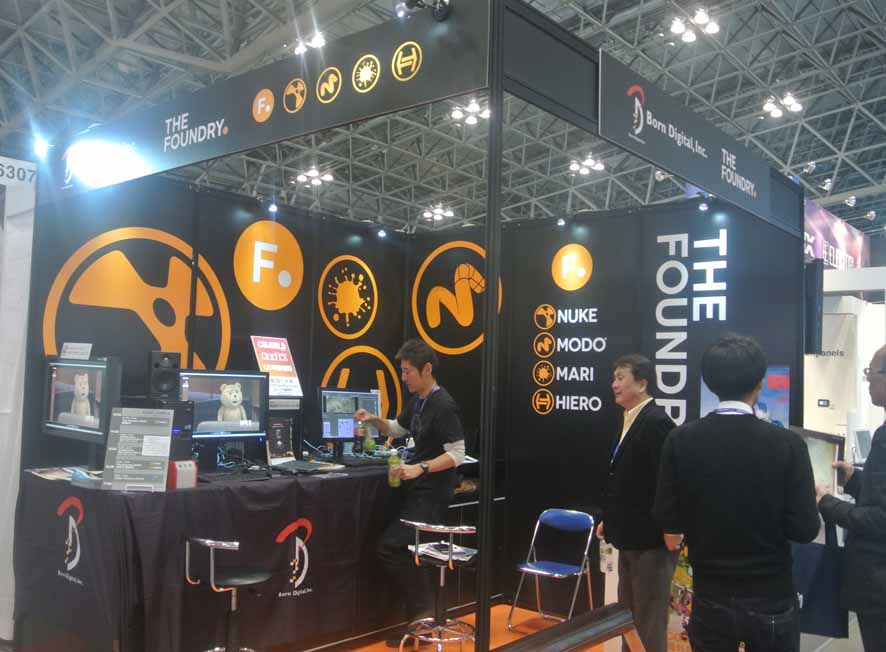 Born Digital has introduced a variety of video production software manufactured by U.K. firm, The Foundry. Born Digital acts as a broker for The Foundry products, and presented many of these at the exhibition.

■Indispensable film production software
The Foundry, established in the U.K. in 1996, has since expanded to locations all over the world, including Japan. They are a nimble organization of approximately 200 people, providing a pipeline to high-performance VFX. NUKE, their top of the line node-based compositing software that enables linear color pipelines and multi-channel work-flows, is widely considered the de facto industry standard. They have also developed and sold creativity tool sets for use by artists.
The Foundry has released many more product lines, including HIERO (shot control and conformity, time-line review), KATANA (lighting, look development), and MODO (modeling, painting, animation, and integrated rendering package).

■VFX tools used in Hollywood films
“Nuke is the pinnacle in node-based compositing tools, and is catching on quickly as a VFX tool for film production in Hollywood,” explains Hideki Takemura, Technology Sales Manager for Born Digital. “It works with resolutions of 4K and higher, and performs the highest quality compositing on photographic and CG images. With NUKE7, you get added RAM cache, which enables faster playback.”
Mr. Takemura added, “MARI is an efficient 3D digital painting tool very similar to Adobe Photoshop, designed to allow artists more time to spend on the creative end of their work. We conduct regular seminars and workshops aimed at showing filmmakers how effective use of The Foundry’s software can play a big role in their work.”
The Foundry’s Japanese representative, Fumiyoshi Yoshimura, released a statement, saying, “Special effects, including VFX, have come to be used in many areas of film production. The Foundry provides software tools that can help take these effects to their maximum potential. As film production enters the 4K and 8K era, we will continue to develop software that supports these high resolution images.”