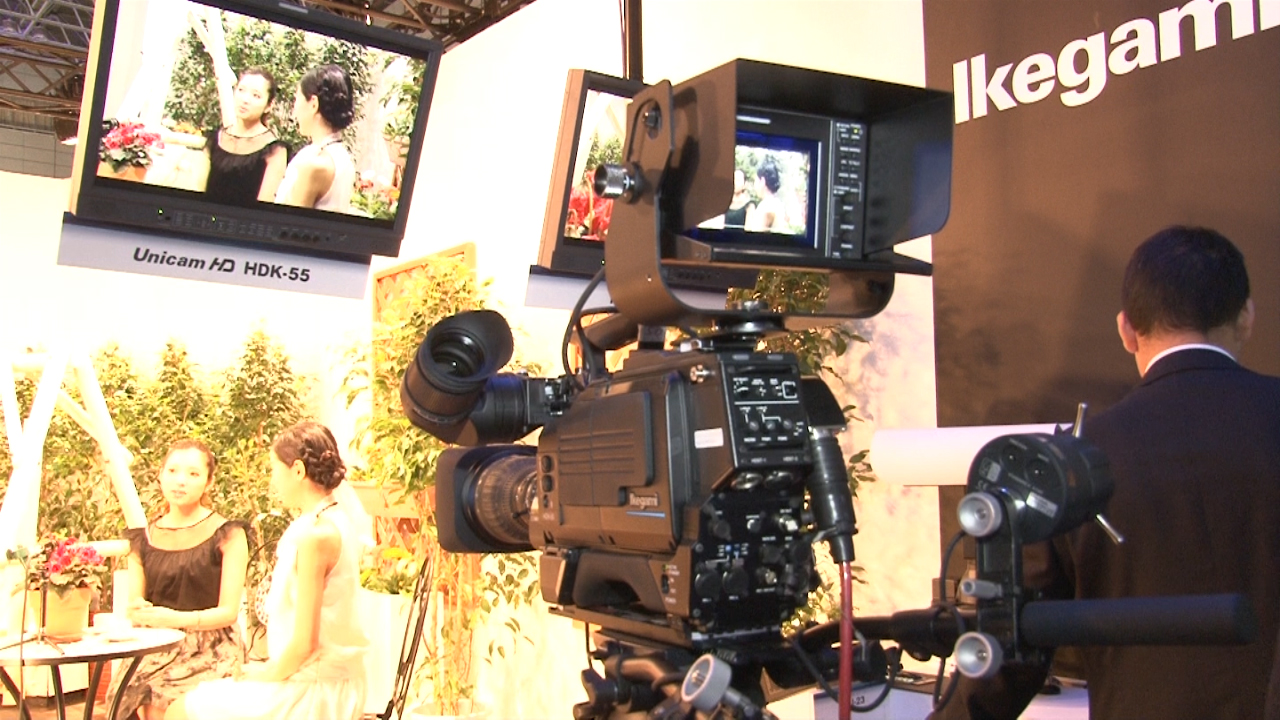 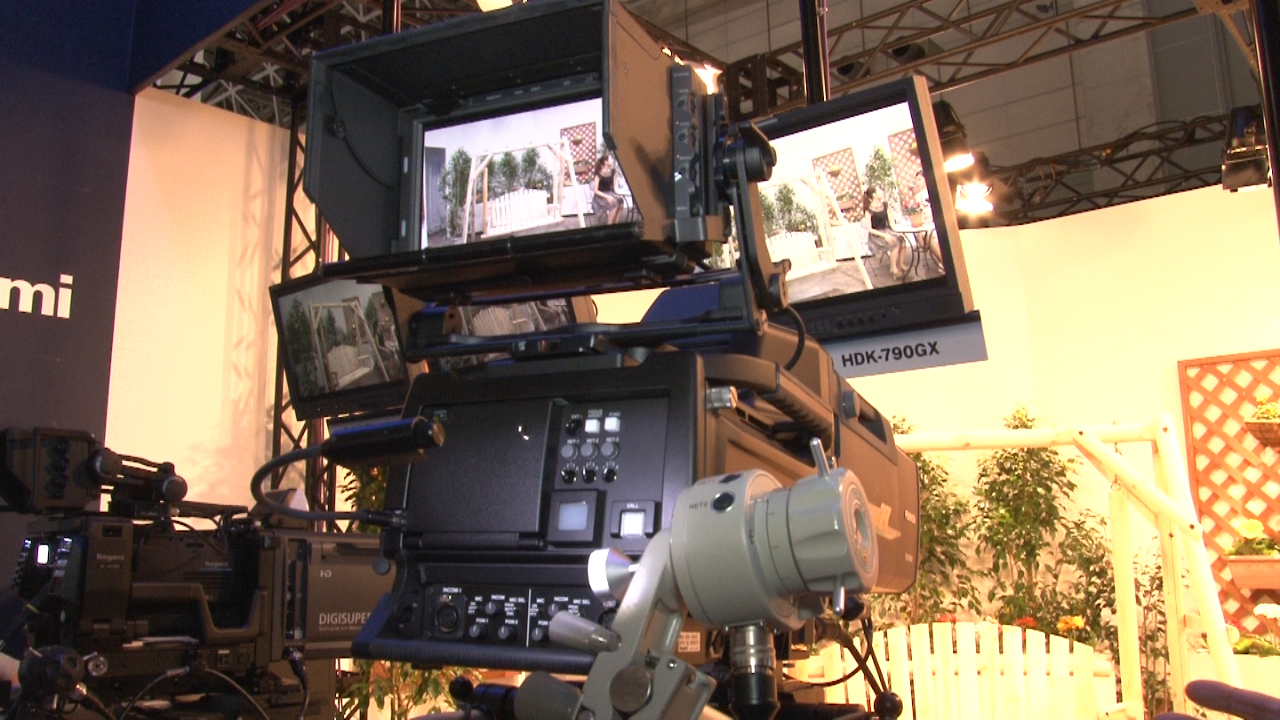 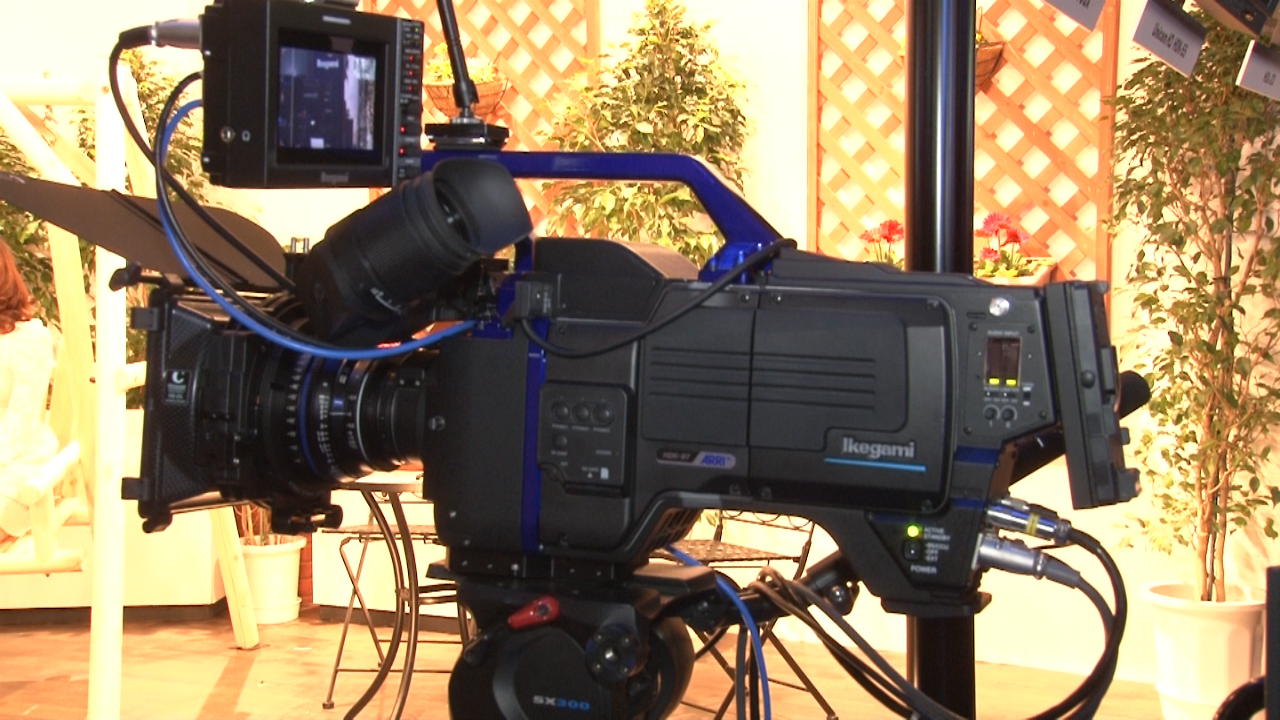 ■A camera system that places pixel size ahead of pixel count
The HDK-97ARRI was born out of a collaboration between ARRI, who have a proven track record in digital cinema, and Ikegami Tsushinki. The front end was developed by ARRI, and the imaging and transmission components were developed by Ikegami.
The product's greatest feature is its focus on pixel size over pixel count. The camera's use of a large-pixel Super 35mm CMOS sensor achieves a high S/N, high sensitivity, and a wide dynamic range. "We aimed for the highest quality of current HD broadcast systems, which made cinematic video expression possible,” explained a staff member.
An imitation studio is set up inside of the booth, featuring a background set, lighting, as well as hostesses. This environment, which simulates how the product would actually be used, provides a chance to use the product and experience firsthand its operability and video quality. The camera was released to market this past October. For the imaging and transmission components alone, the price is ¥11,000,000.

■Delivers clear color video recording under lighting as dim as starlight
The HDL-4500 is a super-high-sensitivity camera intended for stationary photography that would be ideal for use as, for example, an informational camera. While retaining the appearance and operability of a traditional multi-purpose camera, the product utilizes a 2/3-inch, 1.3 million pixel, high-speed, multisampling CMOS sensor, allowing for clear color video photography even under starlight. It achieves a high-image-quality 56dB S/N, and a minimum illumination of 0.001lx/F1.4 or less (60fps). The product also supports HD-SDI output (1080/59.94i 1080/50i).
In the booth, a demo is available offering a comparison with video shot of a darkened environment using the previous-model HDL-45. It can be seen that under the same conditions, video from the HDL-4500 is clearer. The product is scheduled for release in January, 2014. Pricing is not yet determined.

■A master monitor that achieves quality rivaling CRT monitors
The HEM-2570W/1770WR are multi-format master monitors that utilize organic EL (OLED) technology in the light emission component. The monitors feature a wide viewing angle, wide dynamic range, and stable black gradation. Rapidly responsive video takes advantage of the features of OLED, making it possible to eliminate the video blurring often seen on LCD monitors. “The monitors can produce high-contrast, sharp video on par with CRT monitors,” explained a staffer.
The products are equipped with a variety of features that utilize the USB port, such as auto-setup, saving images to memory, fullscreen capture, and mouse operation. The monitors also provide a variety of audio features, including speaker and headphone jacks. The monitors will be available from December of this year, priced at ¥1,300,000 for the 25-inch HEM-2570W, and ¥900,000 for the 17-inch HEM-1770WR.