Inter BEE 2014: Panasonic unveils its "Panasonic 4K World," featuring the Varicam 35 and other 4K products. Also on display is the Lumix GH4U 4K solution, which pairs with a drone for aerial photography 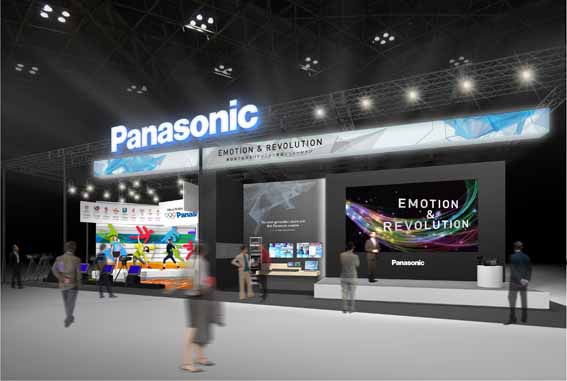 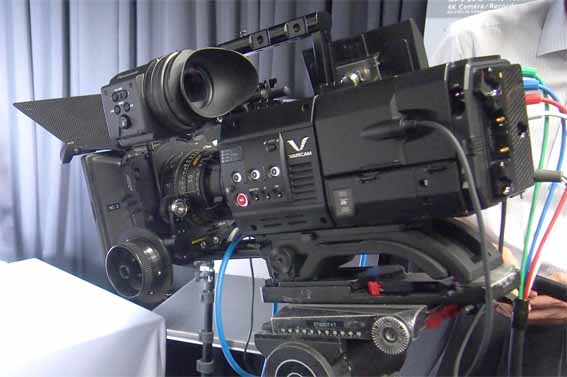 The Panasonic Group (Panasonic, Panasonic System Networks) exhibited at Inter BEE 2014 from November 19 through 21 at the Makuhari Messe in Chiba. (Booth #4308)

The booth concept was "Emotion & Revolution: New Technology Takes Panasonic's Broadcast Solutions Forward." On offer were "end to end total solutions" geared at broadcasters and professionals in the video industry.

The Varicam 35, a 4K camera and recorder, was on display, along with a range of other 4K production solutions. Also on offer was a lineup of digital video and still cameras that included a 4K compatible wearable digital camera.

The 4K production solutions area showed off the Varicam 35, a 4K camera and recorder. Also on display was a workflow demo that used 4K tools from various companies. An aerial drone and three-axle stabilizer were used to demonstrate a solution employing the Lumix GH4U 4K.

The Varicam 35 is a 4K camera that uses a newly-developed super 35mm MOS sensor and features the AVC Ultra codec.
Like the high-speed Varicam HS, which reaches up to 240fps, the Varicam 35 is module-based, letting users assemble the components they need.

The camera also allows for shooting at a dynamic range that exceeds 14 stops. The V-709 gamma curve is equivalent to the previous V-REC curve, making it ideal for shooting content for commercials and TV dramas. The V-Gamut color gamut also supports BT.2020.

The Varicam HS uses a standard 2/3 bayonet mount, and it offers the same 14-stop dynamic range and wide color gamut as the Varicam 35.

Both units feature onboard color grading and feature twin recording elements and two codec formats, allowing for files to be stored for online or preview applications. The Varicam 35 also is slated to support Codex's V-RAW recorder.

■The AV-HS7300, a 4ME live switcher in a new formfactor, demonstrated at the booth

At the studio solutions area, a 4ME live video switcher in a new form factor was being shown. The studio subsystems found at a broadcasting station were installed at the booth for a live demo. Other solutions included network-compatible products and high-speed, high-efficiency file-based workflow solutions through archival systems.

The studio solutions area was also home to a 4K compatible 2/3 multi-purpose camera shown as a reference item and the Varicam HS, which was announced alongside the Varicam 35.