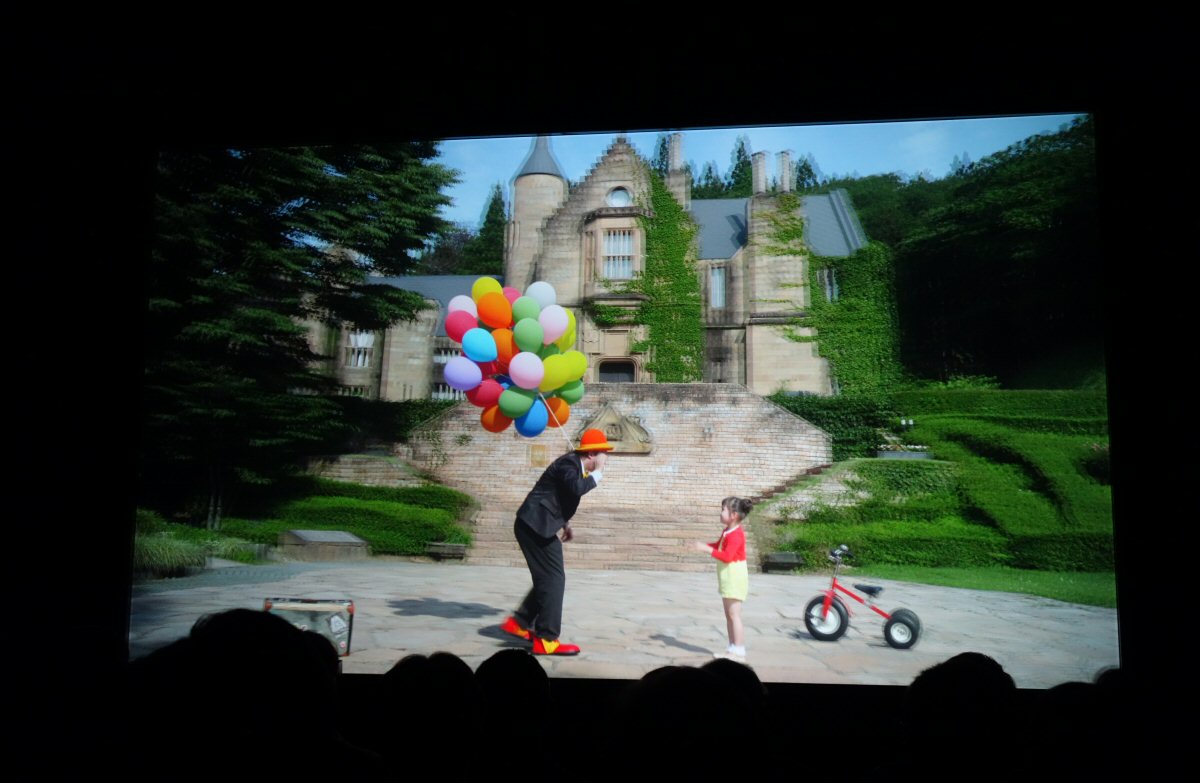 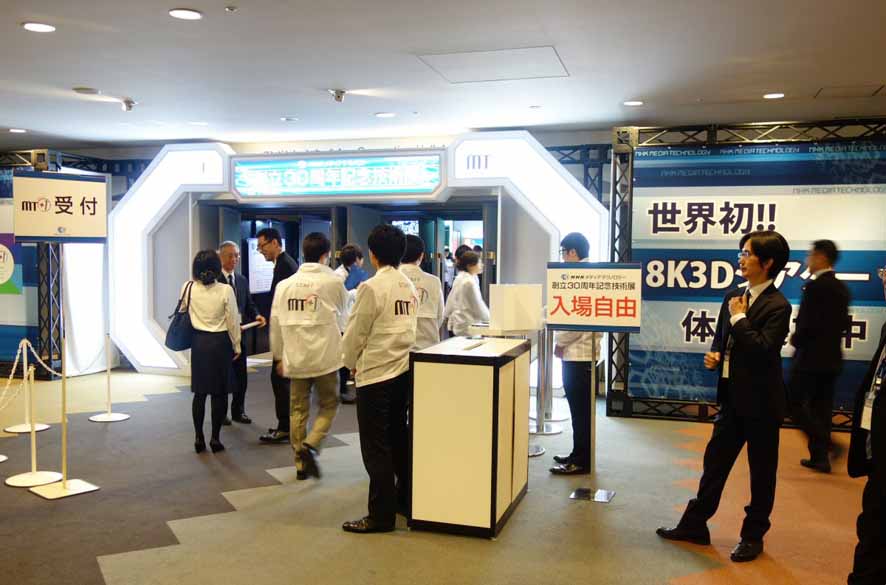 Entrance to the commemorative exhibit at the International C 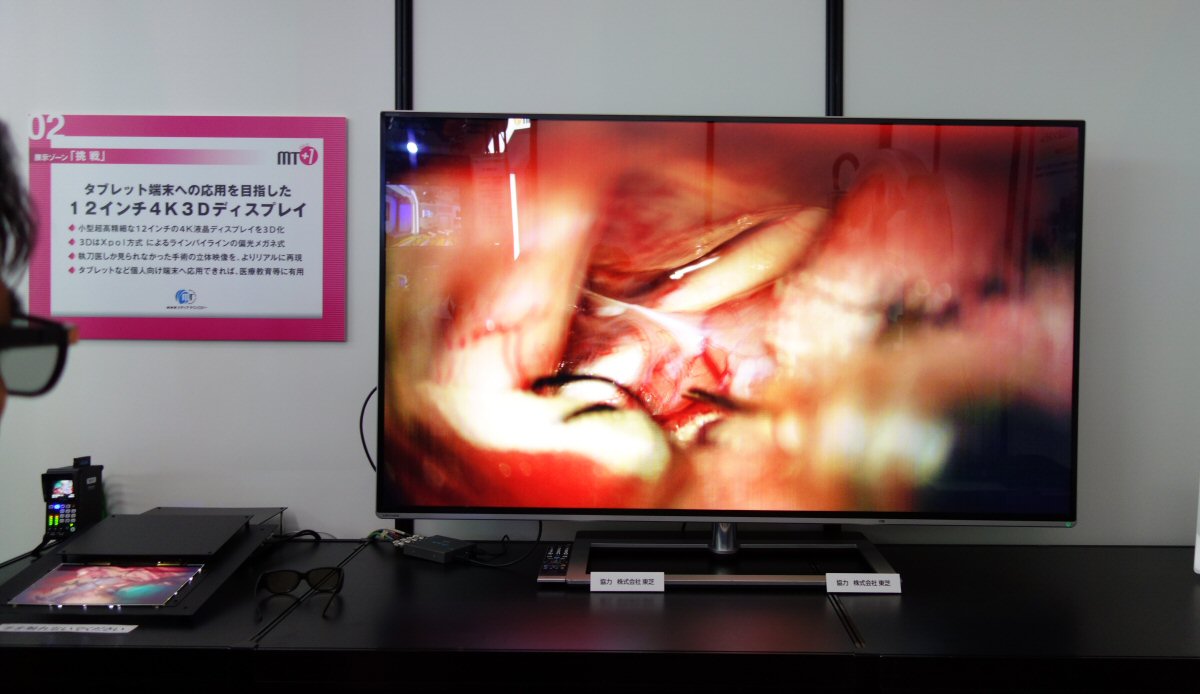 Experiencing a brain surgery simulation with 4K3D. At bottom 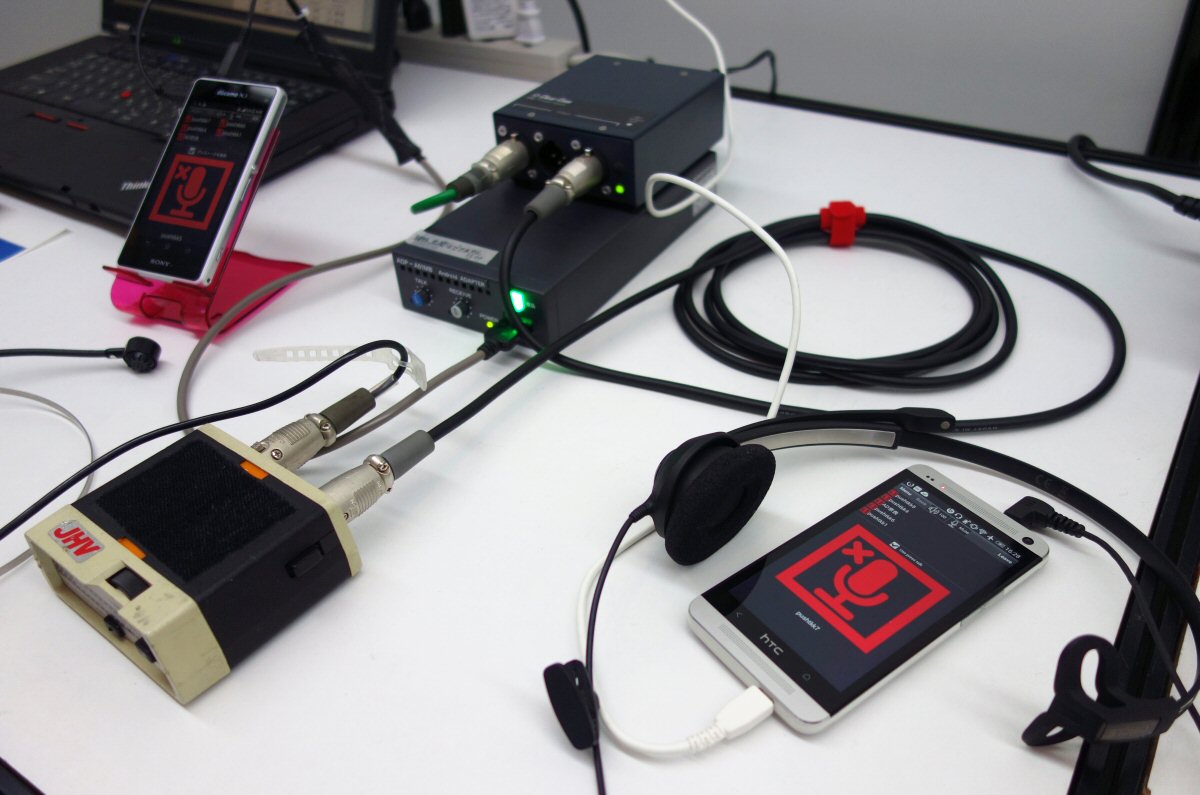 Demonstration equipment for the "VoLTE Anywhere Headset." At

NHK Media Technology is showing its wares at booth 6405 at Inter BEE 2014, while also giving a range of demonstrations at the 30th Anniversary Technical Exhibit at the adjoining International Convention Hall (A). On view will be 8K and 4K video technologies, as well as solutions leveraging cloud-computing and other technologies. The world's first 8K3D theater is already drawing attention, with tickets being issued to reserve places. Both the 30th Anniversary Technical Exhibit and the booths at the expo are lively with guests, underscoring how much interest this year's Inter BEE is generating.
(Photo: three 98'' 8K displays are linked for the demonstration)

The 30th Anniversary Technical Exhibit is being held at the International Conference Hall, just a step out from Hall 6, where NHK Media Technologies' booth is found. The 8K3D theater is equipped with a special 200'' screen playing a live action fantasy film featuring a young girl and a clown. Unlike footage that emphasizes 3D effects, this piece makes natural scenery like a distant church, characters in the foreground, and pews and altars in the church attain a three-dimensional perspective, bringing added realism to the hi-fi 8K footage. A 22.2 channel surround sound system creates natural acoustics; paired with 8K3D images, the effect is not one of watching video, but "experiencing" it as a totalizing event. The event proved so popular that seat tickets ran out, with guests regretfully leaving the hall without having seen the show. We suggest getting in early and securing a ticket stub as soon as possible.


Many attendees showed interest in the 4K surgery video system on display. With support from Juntendo University, actual footage from brain surgery was recorded and played back in 4K3D. Not only is the footage of a high quality, but the realism and three dimensionality shown in the surgery clips drew astonished gasps from the crowd. 4K3D surgery footage is expected to be used for applications in education. In addition to large displays, the hall also had 12'' 4K3D displays intended for use in tablet devices. Watching 4K3D footage on a small-format display provided extreme realism, as though experiencing the event oneself. NHK pitched this system as an effective solution for medical students and other trainees to learn about the surgery process independently before an actual procedure.

The 30th Anniversary Technical Exhibit plays host to a stage where a variety of shows and panels are being held, among them a behind the scenes look at the 8K3D creation process and a discussion of use cases for 4K footage. A theatrical trailer for "Otsunami: 3.11 and Memories for the Future," a 3D film about the Great Eastern Japan Earthquake slated for release in 2015, is also on view.

■Offering a world of convenience that fuses broadcasting and telecoms technologies

A central piece in the 30th Anniversary Technical Exhibit is the VoLTE Anywhere Headset. VoLTE stands for Voice Over LTE and refers to utilizing the LTE transmission format used in smart-phones as a means for voice communication. NHK Media Technologies has taken the built-in headsets used by live broadcasters and combined them with ordinary smart-phones, producing an accessible alternative to specialized equipment. The smart-phone is loaded with a dedicated app which, through data transfer, enables this live headset functionality. It allows for unrestricted bilateral communication in any location and between any device, and can also be paired with existing headset systems. Suggested applications include broadcasts between studios and reports on location. Attendees could be seen enthusiastically querying booth representatives about the merits of this system.

Other solutions fusing telecoms with broadcasting included cloud-based products, digital signage, and TV and smart-phone linkages, among others. One cloud product being demoed is a program creation support tool that uses the Microsoft Azure cloud to upload compressed video footage and offer it for editing from any location.

In terms of digital signage, NHK is demoing a comprehensive 4K digital signage creation, management, and output system which makes use of vertically-oriented 84'' 4K displays. The tool is accessed via an ordinary web browser, achieving a low-cost implementation of large-format signage. A CMS can be used to control content over the Internet.

Finally, one solution involved using a home network to pair a television with a smartphone and link both displays. Characters on the TV screen could be controlled via a smartphone, and the smartphone could be vibrated based on events from the TV.

A range of exhibits at the Inter BEE booths at Makuhari Messe have been consciously built around the arrival of 8K. One is a triple-screen demo that links three 98'' screens together into one monitor. Rather than broadcast hi-fi 8K video on a single-screen basis, it is spread out across the three. The realism is especially palpable when the screens are used to show an environment or piece of scenery, as it makes you feel like you are actually there.

In addition, a demonstration of a live IP stream is being shown, linking the booth at the exhibit hall with equipment at the 30th Anniversary Technical Exhibit. Four IP broadcasting devices are being used to beam footage from the anniversary event stage via fiber optic cable to an 8K display at the booth. This is the first time an 8K IP live broadcast is being used by a private firm, so attendees can see its performance in person.