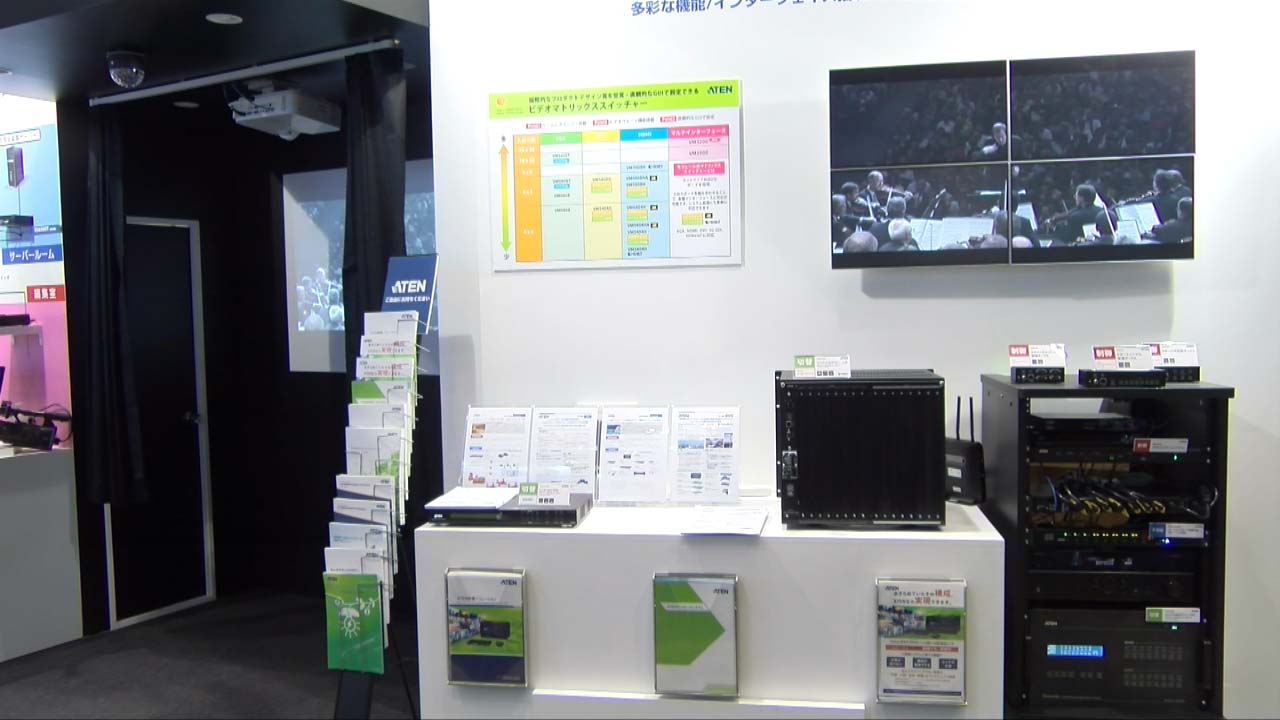 Inter BEE 2016 TV: ATEN Japan
ATEN Japan is participating at the Inter BEE 2016 held at Makuhari Messe for three days from November 16 (Wednesday) to 18 (Friday) and is exhibiting solutions that realize "one-stop switching, distribution, extension and control of images" including 4K@60p (4:4:4) compatible products with demonstrations using actual machines and presentations of cases of actual introduction. Thunderbolt for USB multimedia production, USB 3.0 / 2.0 device "US 7220" allows the shared switching of eSATA and audio on two Macs. It will be the first public release in Japan, and at the booth, "US 7220" will be exhibited in motion.
We will also conduct demonstration of IP-KVM extender, which is adopted by domestic and international broadcasting stations. This product flexibly corresponds to multiple-to-multiple configurations.

Thunderbolt sharing swith "US7220" (New)
"US 7220" is a sharing switch that allows the sharing and switching of peripheral devices and Thunderbolt devices with two Macs, realizing higher efficiency in the 4K multimedia environment. With two Macs, a total of 15 peripheral devices can be shared and switched with a single button. Simultaneous 4K video output and high speed data transfer with maximum throughput of 20 Gbps. One port of both Thunderbolt and HDMI installed. Suitable for environments using two 4K compatible displays. Scheduled to be released in 2017.

Multicast compatible DVI IP-KVM extender "KE6900"
IP-KVM extender that has no extension distance limit and suffers no effect on image quality and operation response due to extension distance.
Supports multiple-to-multiple communication using matrix manager software "CCKM", realizing simultaneous work from different places and expansion according to usage. Resolution up to 1,920 × 1,200 @ 60 Hz, 24 bit color depth support. It has various functions such as AES-128 bit encryption, remote user authentication function such as RADUIS, LDAP, AD and supports RS-232 and virtual media.
In this new model, the video wall function is added. For example, by using one transmitter and four receivers you can display on the large screen of 2 × 2 video walls by disassembling the video into four (top right, bottom right, top left and bottom left).

"ATEN control system"
Product that can be used to operate and control video switchers, projectors and lighting by using ordinary tablets and smartphones as control terminals. The operation screen has a user-friendly design, making it possible to control and operate the equipment even for a non-expert operator. Expansion boxes (Serial, IR, Relay) can be easily added to improve convenience.