Inter BEE 2018: Euphonic will exhibit and demo an AR shooting game based on ARKit 2.0 at DCEXPO 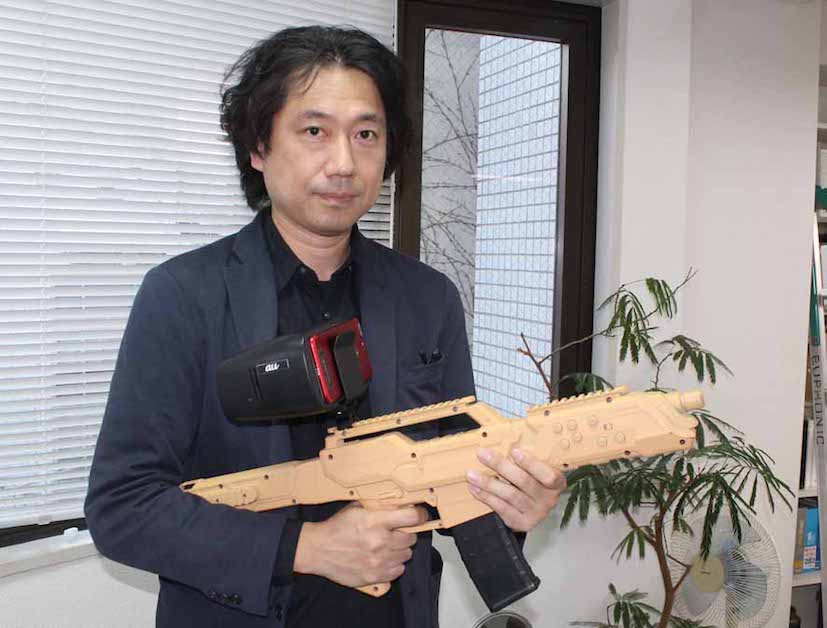 A smartphone is attached to the gun-shaped device’s sights area and used to aim.

Euphonic, a company dealing in VR, AR and MR content, will exhibit and demo an AR game platform based on Apple’s ARKit. “Jurassic Island,” a shooting game that opened at Huis Ten Bosch in summer of this year, is built on the same platform.
The sights of the game’s gun-shaped device are equipped with an AR smartphone. Navigating using GPS, moving around causes CG dinosaurs to appear on the phone’s screen. The aim of the game is to survey the ground and shoot the hidden dinosaurs that spring forth into view. 100 people can play simultaneously in the same area.
In Jurassic Island, players take an expedition by ship to a deserted island, using it as the play area to enjoy the game. (Above photograph: Mitsuru Sato, head of Euphonic’s Design and Production department, holding the gun-shaped device in his hands.)

At their booth, Euphonic will show a gameplay video of the currently operational version of Jurassic Island, and unveil the “Jurassic Island ARKit 2.0 Version,” the latest version of the game, built on their latest version of their game platform.
As this technology utilizes GPS and a variety of sensors to combine real-world camera images with CG and text information, it has the potential to be used in a wide variety of services, from tourist guides to manuals, in addition to the types of attractions described above.
Under their arts brand, Plexus, Euphonic is also developing Cube, a VR exhibition simulator for exhibiting works of art in virtual spaces.
Mitsuru Sato, head of Euphonic’s Design and Production department, states, “Cube will allow photographers and artists who have few opportunities to exhibit their works the chance to do so in a virtual space, as well as allowing users to see in advance what kind of works are being shown at actual exhibitions. A variety of productions are possible in accordance with space and location.”