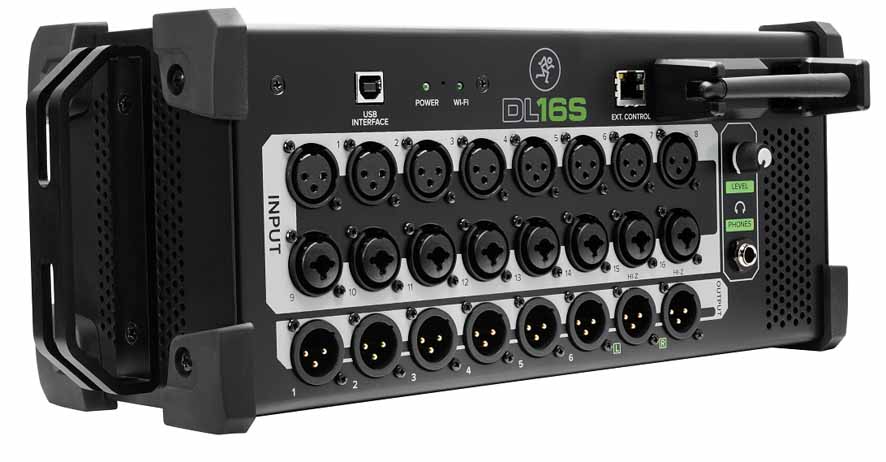 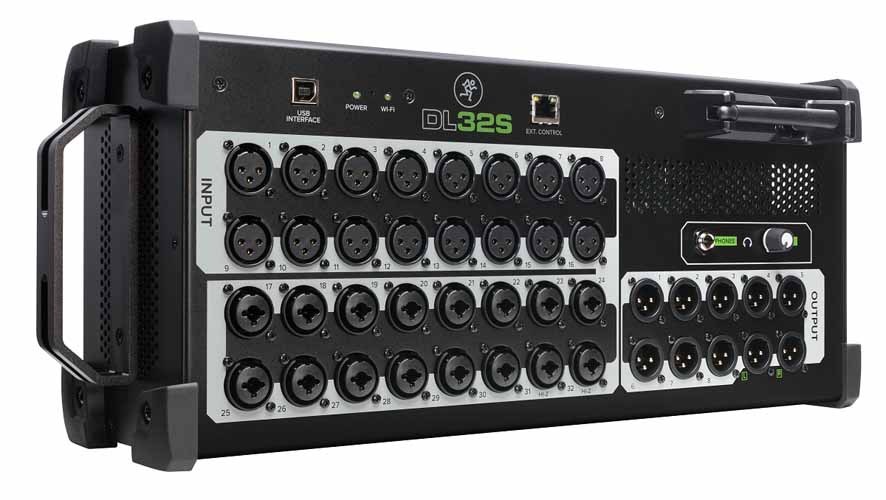 Onkyo Tokki will participate in Inter BEE 2018, held at Makuhari Messe in the span of 3 days from 11/14 (Wed.) to 11/16 (Fri.), and display their newest products from brands they handle as their sole distributor.
Before the exhibition, we asked Mr. Kyozo Ichigaya, the section chief of the Onkyo Tokki MACKIE brand group, which is in charge of MACKIE products at Onkyo Tokki, about the contents of the MACKIE product exhibition.

"DL32S" and "DL16S", the new wireless digital mixers which went on sale on 11/9, are the newest products from the DL series. (Photo - DL32S (right), DL16S (left))
Mr. Ichigaya says that MACKIE wireless digital mixers are "lightweight, compact, and durable mixers which American musicians carry in a bag".
"The MACKIE DL series is a wireless digital mixing system which was announced at the NAMM Show in January 2012. At that time, it created a sensation as the only digital mixer whose functionalities could all be controlled with an iPad. Its design gained a reputation for being able to withstand usage in the rough environment of repeated moving and performance on lives every night. MACKIE is also hailed for its "Built Like a Tank" design, and that point is emphasized." (Mr. Ichigaya)

The MACKIE Onyx + mic preamp is installed on all inputs, and a high-quality sound is achieved with high headroom and low noise. The mixers are equipped with XLR3 output connectors (DL32S:10/DL16S:8), with which an abundance of output buses (DL32S:15/DL16S:13) can be assigned in a flexible manner. In addition, 4 types of effects units are also installed, and outboard equipment is not needed. The DL16S supports 16 channels, and the DL32S supports 32. The DL16S has 16x16, and the DL32S has 32x32 audio interface functionalities.

■The newest version of the application supports Android devices too

The DL series has been providing a dedicated application for many years, and functionalities which reflect the users' requests have been added through free updates. The newest version, "Master Fader 5.0", was announced on October 31st. The application previously supported only iOS, but the newest version supports Android devices as well. Controlling the DL16S and DL32S from an Android tablet or smartphone in addition to an iPad or iPhone became possible.

There is a built-in Wi-Fi router, so you can do digital mixing if you have an iPad or Android device, even without a router. One of their major features is the ability to control multiple devices using Wi-Fi. You can simultaneously use up to 20 devices which support Wi-Fi, including iPads and Android smartphones. With this, a way of use such as the main audio engineer controlling the main mix from a tablet, and the musician controlling the stage monitor from a smartphone, is possible.

■Up to 20 MacOS or Windows machines can be connected simultaneously
Furthermore, Master Fader v5.1, scheduled to be released sometime around the New Year, supports MacOS and Windows as well. The mixers will become usable in many more settings beside live mixing, such as by equipment engineers and recording engineers. As before, up to 20 devices will be able to access the mixers.

From now on, their operability will be improved, along with installing many more effect engines, such as choruses, flangers, rotary speaker simulators, and auto filters. You will be able to select the effect type you want, and intuitively control the currently assigned effect. FX processors will be added to the DL32R, and you will be able to use a total of 4 effects unit types simultaneously.

Furthermore, Master Fader v5.2, scheduled to be released after January 2019, will have 8 user-programmable buttons and an encoder which can be assigned to each channel in the DC16 control surface for Axis digital mixing. A system lock functionality which prevents inadvertent configuration changes and malfunctions will be implemented, making it usable not only in live mixing, but in venue acoustics as well.

■Gifts at our booth every day to those who first come and make a post on social media
During Inter BEE 2018, we'll be giving out MACKIE Logo Zebra Markers or MACKIE Logo 4GB USB sticks every day to the first 50 people who come to the MACKIE corner at the Onkyo Tokki booth (Hall 1, booth number 1301), take a photo, tag it with "#MackieInterBEE", share it on social media, and show the post to the booth staff.

Brands on display including MACKIE and exhibited products from each company are as follows: