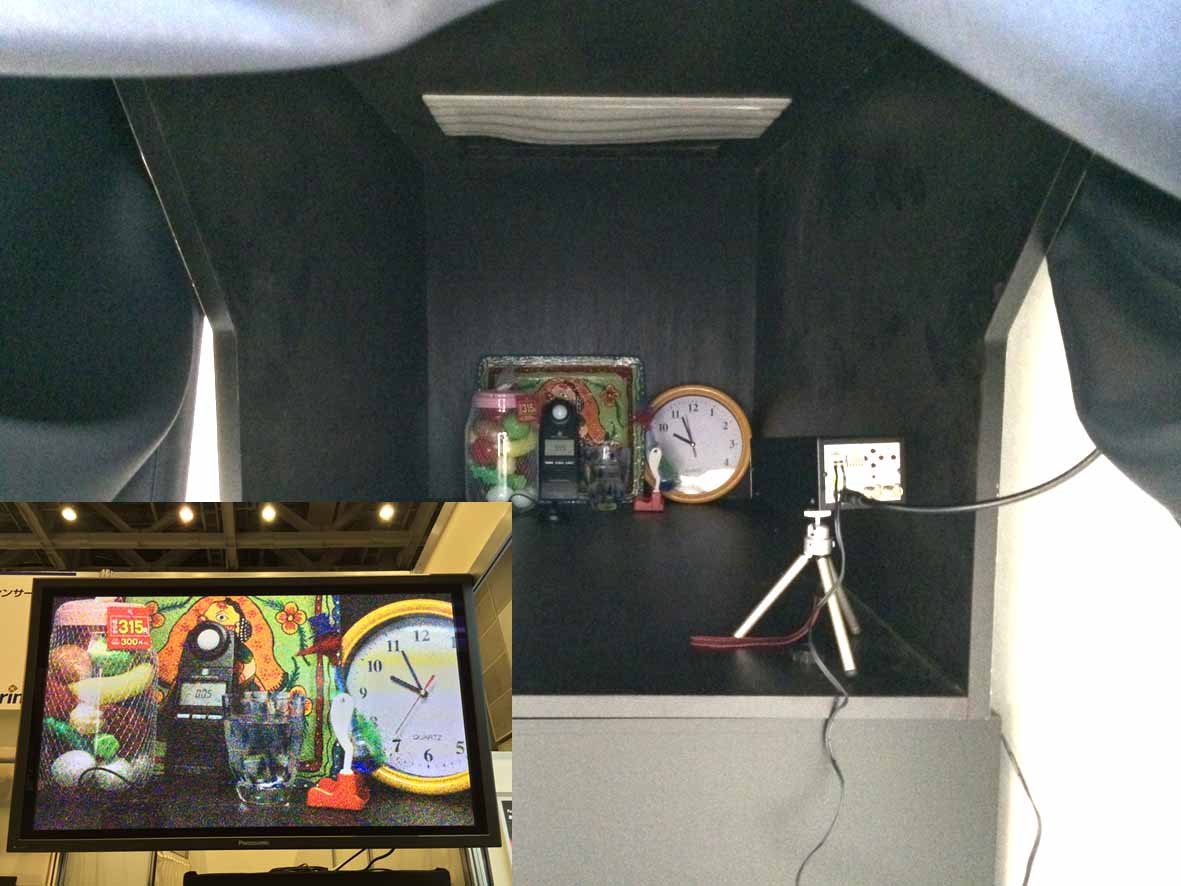 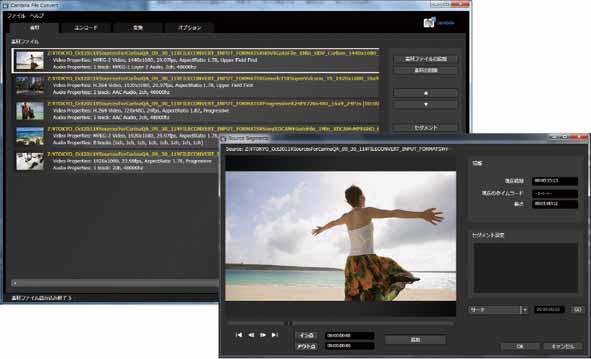 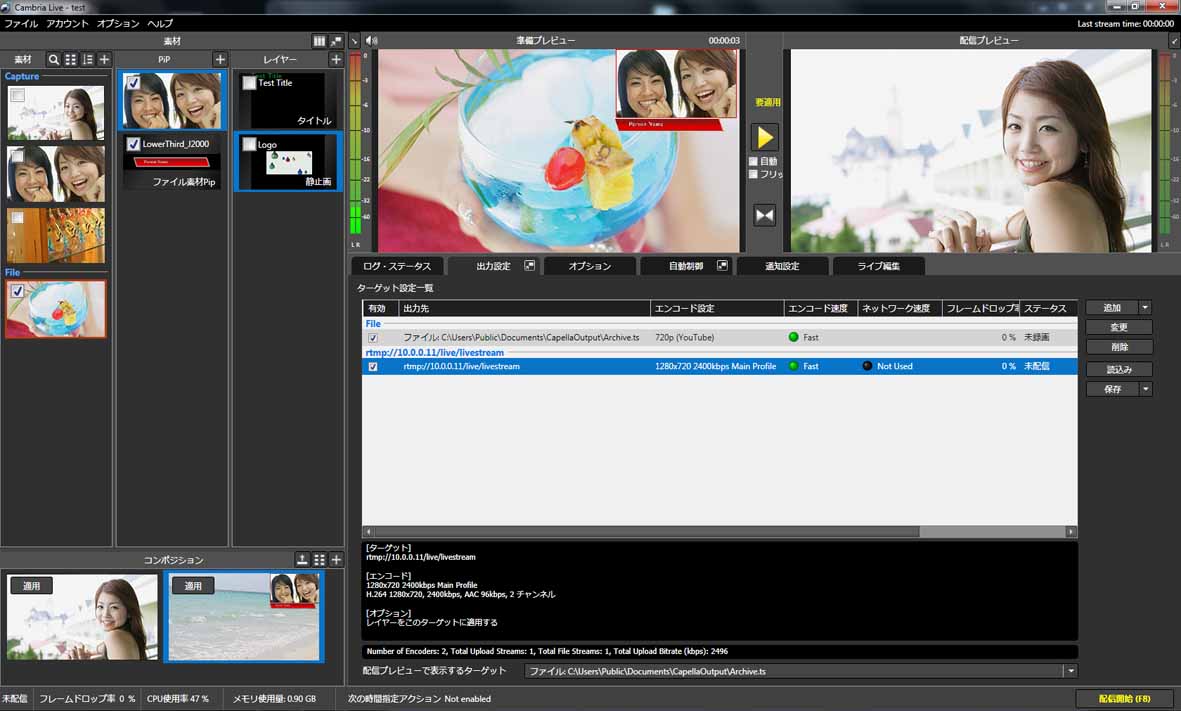 Carina System will be exhibiting at Inter BEE 2014, which will take place at the Makuhari Messe in Chiba from Wednesday, November 19th to Friday, November 21st. At their booth (Booth #5406), their exhibit will center on a group of products that are aimed at facilitating 4K video production, in anticipation of next generation video delivery services. Their goal goes beyond displaying individual products. Taking into account that we have already entered the practical stage of 4K video production, they propose a solution for 4K workflows. (The main image above shows the inside of a portable darkroom, set up at the booth. The room becomes dark with an illuminance of 0.05 lx when the curtains are closed. The lower left inset shows a bright color image filmed by an “SSC-9600” camera in this environment, displayed on a monitor.)

■A Software-Based 4K HEVC Encoding System
The newest version of “Cambria FTC”, which supports HEVC (H.265) encoding, will be exhibited for the first time. In addition to supporting SONY XAVC, DPX input, and HEVC (H.265) output to meet 4K content delivery needs, the system has been quick to also support Smooth Streaming and MPEG DASH output. The system already has a proven track record of operation.

■An Internet Video Delivery Workflow Implemented by Mainichi Broadcasting System Will Be Introduced, Emphasizing Achieved Results
The proposed solution has already been implemented by Mainichi Broadcasting System (MBS), which operates an "automated news video delivery workflow" and an "editing and conversion system for video on demand (VOD)."
The automated news video delivery workflow uses a network encoder, "MEDIASYNERGY NEX," and scheduled video recording software called "Sylphid Scheduler" to automatically record the SDI signals of news broadcasts. As news material is being recorded, "ClipCutter" cuts and edits the material. The editing job is then passed on to "Cambria FTC," which is the file conversion software that performs the encoding. The edited news video is transferred over FTP and shown as a news article link on the company's website.
In terms of recording preferences, not only can they be adjusted on the webpage for scheduled recording settings, but they can also be easily adjusted manually—even on short notice for suddenly aired programs—by using the touch panel on the front of the encoder while watching the video content.
As for the editing and conversion system for VOD, it was initially developed to provide quick VOD delivery for footage on the annual National Invitational High School Baseball Tournament that MBS offers on its website. Composed of live video broadcasting and an instant video editing component, the live recording/delayed editing system is built around the Internet-based content delivery system "Cambria Live." With this system, it is now possible to update on-demand videos of highlight scenes such as when a point is scored, almost at the same time as the live broadcast.
Specifically, the footage of a game obtained via HD-SDI is encoded into H.264 format using "Cambria Live." As it is being delivered live over the Internet, the footage is recorded to network-attached storage; immediately after the content is recorded, "ClipCutter," the instant video editing system, starts to edit the video. After editing, Cambria FTC finalizes the video, making any necessary conversions, and uploads the content automatically to be delivered as VOD. Taking advantage of the benefits of instant video editing, the highlights of a match, including goals scored or a mid-inning scene, can be updated as VOD at any time even during the match.
At the booth, the actual devices that make up this solution are displayed, allowing a hands-on experience of their operability. The following is a list of the products to be displayed and their descriptions.
・"Cambria FTC"
Cambria FTC is an ideal piece of file conversion software for 4K video production, supporting HEVC (H.265) encoding. In addition to video compression format conversions, it can make resolution and frame rate changes as well as logo insertions and audio level adjustments.
・"Cambria Live"
Cambria Live is an Internet-based content delivery system for broadcast stations and cable TV stations. It can directly convert HD/SD-SDI or HDMI input into H.264 format. By linking it to "Clip Cutter," an editing program, video content can be edited immediately after it is recorded (instant video editing). Other products to be displayed include "Cambria Live Studio," which is an all-in-one live content delivery system that can be operated by one person, and "Cambria Live Broadcast," an Internet-based content delivery system for broadcasting stations.
・"Cambria Cluster"
"Cambria Cluster Manager" is a management system that can assign encoding jobs to multiple Cambria FTC units on a network to perform automated parallel processing.
・"MEDIASYNERGY NEX"
MEDIASYNERGY NEX is a network encoder that supports multiple input formats, multiple interfaces, and 3D output. It also has a scan conversion function. Equipped with HD/SD-SDI, DVI-D, S-Video, composite video, and RGB input terminals, it supports H.264 multi-pass encoding. By connecting it to a USB-connected hard disk drive, a Blu-ray drive, or network-attached storage, it also functions as a stand-alone recorder.
・"ClipCutter"
ClipCutter is an instant video editing program that enables video editing as soon as video content is recorded on a server from broadcasts or video tapes. It allows users to make highlight videos efficiently with minimal time, so it is ideal for live sports broadcasts and Internet-based content deliveries that require instant delivery.

■"SSC-9600" – A Camera That Produces Color Films in Low-Light Environments of 0.005 lx
At their booth, Carina System will also be displaying their new ultra-high sensitivity full HD video camera, "SSC-9600."
SSC-9600 is an ultra-sensitive box-type video camera, equipped with a full HD 1080/30p color sensor as well as an originally developed three-dimensional noise reduction function. Videos can be recorded in low-light environments in which the filmed object may have an illuminance as low as 0.005 lx. Performing better than “Night Vision Gen 3” cameras, this camera can take videos of objects in the dark, which cannot be seen with the naked eye, as if in daylight and in color as well. It automatically adjusts to the amount of ambient light, making it possible to film in bright environments, too. It can be used both day and night. It is also equipped with a fog removal function to make it suitable for coastal monitoring.
Suited for monitoring from fixed locations, the camera has been used in Japan for monitoring dams, monitoring tsunamis in coastal areas, and for surveillance at airports and power plants. The company is also proposing other uses such as filming documentaries. The price is ¥1.2 million plus tax.
At the booth, a portable darkroom has been set up. The insides of the darkroom are too dark for the naked eye to see clearly, and visitors will be able to check the performance of SSC-9600 as the insides of the darkroom, as seen by the SSC-9600, are displayed on a monitor.
At their booth, Carina System will also display the "KC-2000" camera by Komamura Corporation, with which they cooperated technically. The camera is a lightweight, compact, handy type that has a rainproof and dustproof design. It has a track record of numerous uses by foreign military and police forces.