DL32R with 32-channel input terminal. Use a single unit as a 100% iPad-controlled digital mixer. 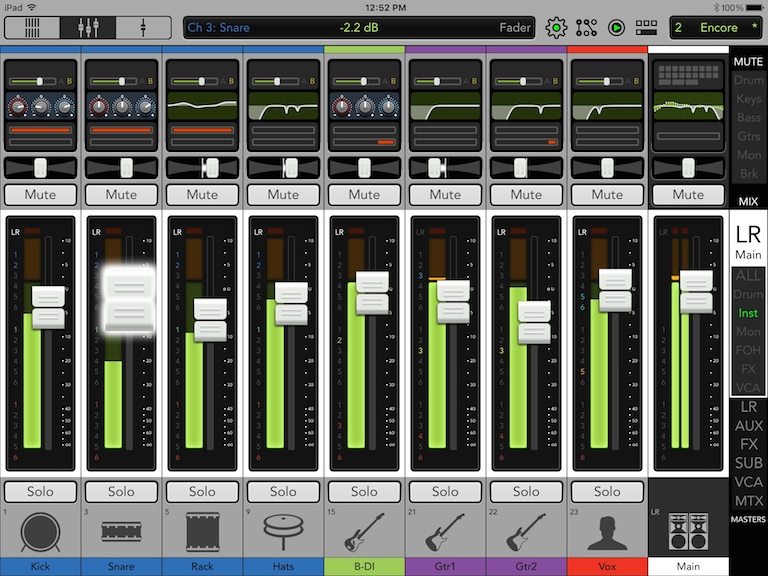 Current mixer status displayed on iPad. Can be set to display identically on DC16 and iPad.

Onkyo Tokki presented a number of pro audio products at the Inter BEE 2016 exhibition held 11/16~11/18 at Makuhari Messe in Chiba, including a PA system, mixers, and speakers (Booth 2205). But the product that caught attention at Inter BEE 2016 was the new live mixer by Mackie, called Mackie AXIS. More than just a live mixer, this 32-channel digital mixing system can be used to achieve of a wide range of purposes.

■iPad and control surface combination for the DL32R
Mackie AXIS is a Mackie-manufactured digital mixing system, first introduced by Cloud Technologies at NAMM Show 2016. Inter BEE 2016 was the first time the product has been exhibited or demonstrated in Japan. Mackie AXIS is a 32-channel digital mixing system, but it is configured from a combination of two products. It is a system made by combining the DL32R 32-channel digital mixer capable of wireless mixing via iPad, and the DC16 control surface, newly developed for use with the DL32R.
The DL32R and DC16 connect using the industry standard digital network protocol, Dante. Onkyo Tokki’s Mackie sales representative explained, “What earns the DL32R such high praise is that it can be completely controlled with only an iPad. On the other hand, we have heard from many that they also want a console with physical faders, so with the exploitation of the DC16, Mackie AXIS gives them the system they want.” Mackie AXIS enables all DL32R operations to be controlled either on an iPad or on the DC16 control surface.

■Practical use with a combination of console and mobile iPads
The DC16 consists of three iPads set up on a console, equipped with SmartBridge functionality that enables integrated use. The iPad in the center of the console has a wired connection, and displays the status of selected channels. The other two iPads connect with Wi-Fi, and can be brought on stage as needed for use in various applications, such as stage monitor mixing.
Content displayed on the iPads can be selected from a wide range of settings. For example, when the center iPad is displaying the stage of the currently selected channel, the iPad on the left can be made to show the last previous setting, enabling the user to readjust to the previous setting if necessary. “Only Mackie offers a digital mixer on which past information is viewable,” said the Mackie rep. This user-friendly feature is another earning high praise. The third iPad on the right can be set for use as a changing display, with many users opting to use it to view VU meter and spectrum analyzer data.

■Numerous potential application with DL32R at the center
The DC16 has 16 faders, each with its own compact display. The names of the channels set to the faders display, and they can be set for viewing icons or artist photos for individual instruments. These will also be displayed on the iPad, enabling operation with identical visibility on both iPad and console. Status of gain, equalizer, and other elements for each fader can also be displayed.
The DL32R is capable of connecting directly to a USB hard disk drive, so while performing the work of a live mixer, is can also be used as a recorder, and for 32-track recording data playback. The DL32R can be used as a recorder by connecting it to another mixer using Dante. It can also be employed as a mixer when used in combination with the DC16, enabling a vast range of applications on a single unit.
Mackie AXIS is slated for release in Japan in early 2017, at a price of about ¥800,000 for the system. At Inter BEE, the company provided a hands-on demo where users could experience simulated mixing on Mackie AXIS using multitrack recording data. “We really want users to experience its amazing operability and visibility,” said the Mackie rep.