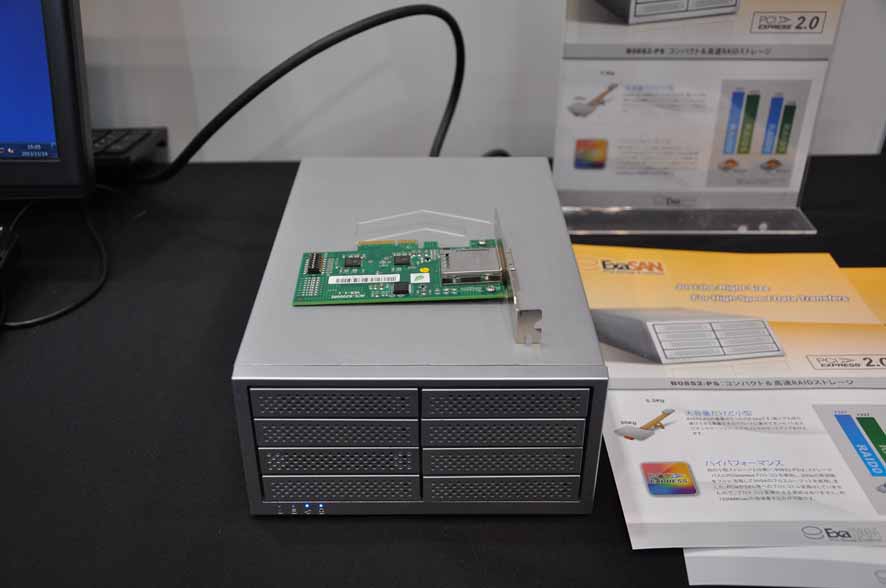 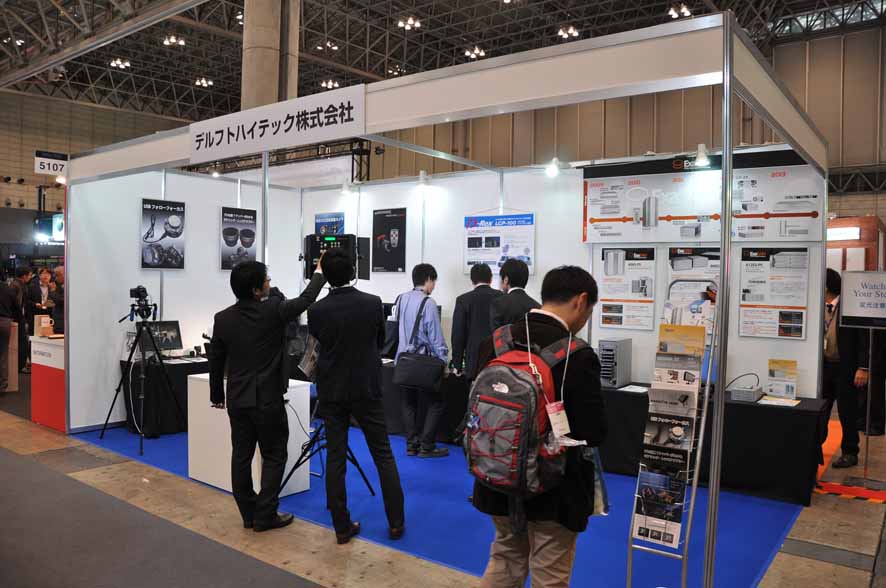 At Inter BEE 2013, held for three days from November 13 to 15 at Makuhari Messe in Chiba, DHT Corporation showcased the Accusys B08S2-PS (above photo), a compact, high-speed RAID storage system offered by the company.

■ Delivers actual measured speed of 1,200 MB/s, twice as fast as Thunderbolt
The Accusys B08S2-PS storage server can fit up to eight SSD and provide 1,400 MB/s read and 1,300 MB/s write speeds utilizing PCI Express 2.0, enabling 16-bit 4K video editing as well as multi-stream 2K video editing. It weighs 5 kg. “This system has actual measured read and write speeds of 1,200 MB/s, which is about twice as fast as the thunderbolt, so you can copy, say, 1 TB in 12 minutes,” the presenter explained.
The B08S2-PS includes a DAS 20 Gb QSFP HBA and 2 m QSFP cable for the purpose of connecting to workstations and SANs. According to DHT, “If you connect two B08S2-PS’s using a dual-port QSFP HBA and use the OS striping function, you will have double the capacity and twice the read/write speed of a single unit, enabling you to handle large volumes of data easily." Moreover, “If you connect a B08S2-PS to one of the ports of a dual-port QSFP HBA and the other port to an SAN, then you will be able to transfer data at high speeds between the B08S2-PS and the other storage system which is connected to the SAN."

■ Ensures reliability with Performance Equalization mode (EQ mode)
The system also comes equipped with a Performance Equalization (EQ) mode for preventing dropped frames in video data and stabilizing read/write operations, as well as DLP (disk lag proof) technology which utilizes algorithms to prevent lag and enable completion of data transfer even when a drive causes lag due to multiple read/write retries because of deterioration or defects in the drive. “We are emphasizing reliability over transfer performance,” stated the presenter. Supported operating systems include Windows 7/8 and Mac OS.