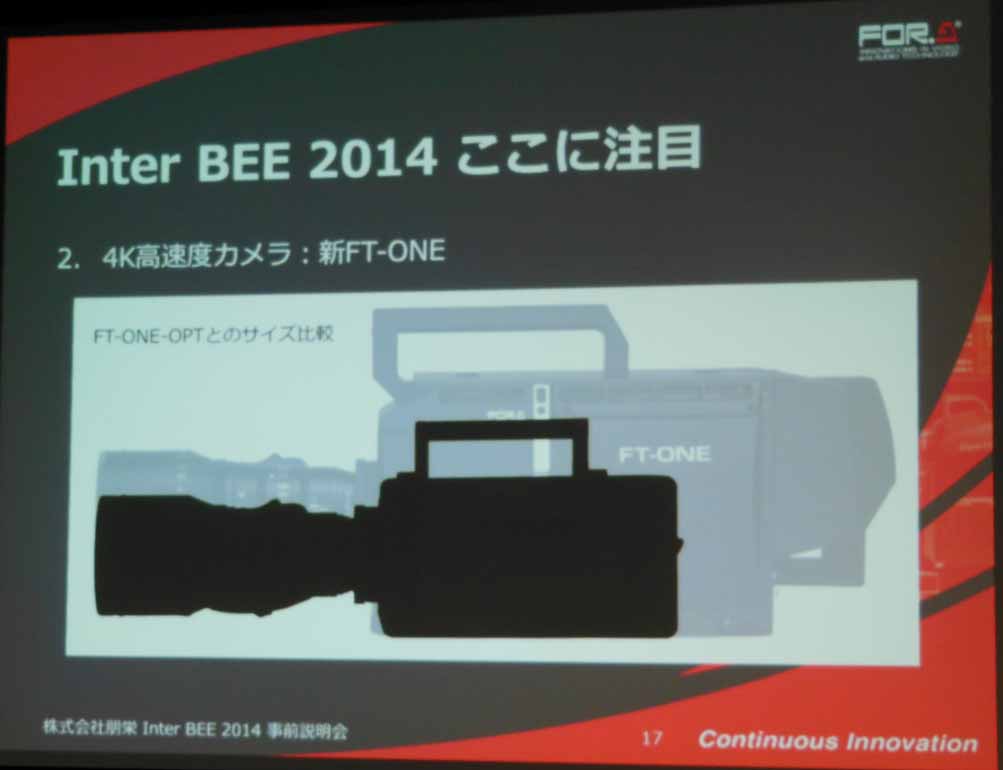 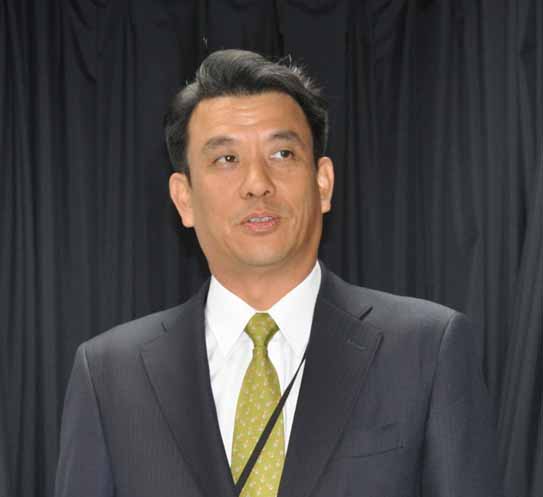 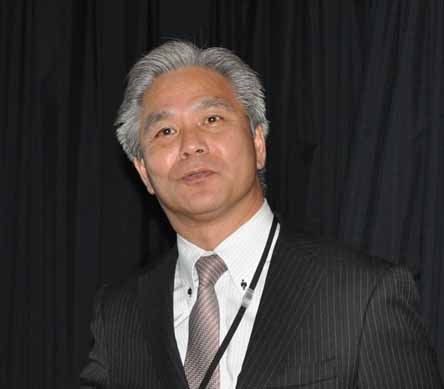 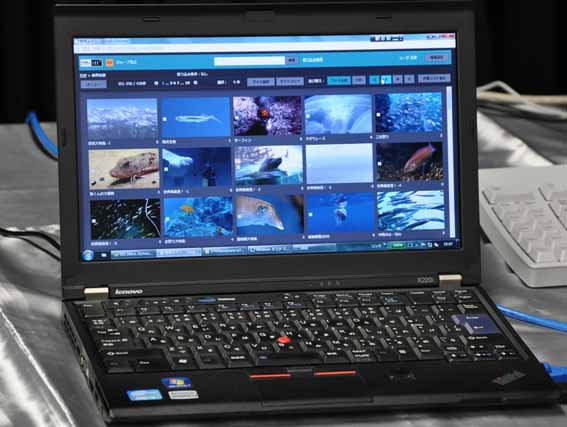 On October 30th, 2014, FOR-A hosted an advanced briefing at their Shibuya headquarters on their plans to exhibit at Inter BEE 2014 from Nov. 19 (Wed.) thru Nov. 21 (Fri.) at Makuhari Messe. Keeping up with last year’s theme of "Continuous Innovation," and promoting their "FOR-A for a 4K Future" concept, the FOR-A booth (no. 4208) revealed an array of 4K compatible products, including a video switcher, multi-viewer, character generator, and processing devices. The company also showcased file-based, archiving, and baseband technologies, a virtual system, specific use cameras, and many other new products.

■ Delivering many news sub-systems and file-based systems in Japan
In an initial address, FOR-A president Katsuaki Kiyohara described the company’s recent movements in both Japan and overseas. He explained that in Japan, "Right now, we are not seeing the level of sales we expected, but our operating profits are forecast to increase over the previous fiscal year. It was a year in which the essential quality of our sales improved."
Last year, FOR-A also undertook several news sub-system projects, including beginning work on news sub-systems for Toyama Television, Fukui Television, and Asahi Broadcasting Fukui. Additionally, "Unification of baseband and file-based is becoming very crucial," said Kiyohara, retracing the activity of the past year. "File-based systems are being united with core baseband products like switchers, multi-viewers, and routers. We are pushing these ingenious systems for all their appeal and benefits. We also moved ahead in news editing systems this year, with file-based tech playing the lead role."
The company’s FT-ONE 4K high-speed camera is also seeing gradual success, with one camera being sold to TV Asahi along with many rentals, one of its major uses being for sports such as golf, tennis, and soccer.

■ Strengthening efforts in the high-def era of 4K, 8K, and beyond
The company’s strength overseas is delivery of peripheral broadcasting equipment, with the nucleus being their HANABI series of compact video switchers (HVS-100/110). "With the exception of Europe, we are seeing year over year results in every region as being even or increasing," Kiyohara explained. "As our successes steadily pile up, we are hoping to greatly increase the share of our products going to exports." On the topic of 4K, Kiyohara acknowledged that, "Although the FT-ONE is being used by KBS in Korea for sports and other purposes, we still need more time." As for the future, the FOR-A president said, "The 4K/8K era is imminent, both in Japan and overseas, and we are hoping to expand our efforts so we do not miss out on it."

■ Buzzwords "world premier" and "Inter BEE debut" swarm around new compact FT-ONE model and more
At this year’s Inter BEE, FOR-A is carrying over their main theme from last year, "Continuous Innovation," and focusing their main stage presentation on promoting their sub-theme "FOR-A for a 4K Future" concept by featuring 4K production and editing and other 4K solutions.

■ World debut of FT-ONE-S, a new compact, detachable head FT-ONE model
The FT-ONE-S, boasting all of the strengths of the FT-ONE 4K high-speed camera in a new compact, convenient model, will make its world debut. The FT-ONE-S camera head is detachable, and it connects to a base station via fiber optic cable. It weighs approximately 5.5kg and has dimensions of 180mm(W)x197mm(H)x290mm(D). It uses a PL mount and a different sensor from the one used by the FT-ONE. The new model was not available for view at the advanced briefing, but FOR-A plans to show it off in the Inter BEE exhibition hall.

■ HVS-2000 HANABI video switcher with unique functionality makes its Japan debut
The 4K compatible 2M/E HVS-2000 HANABI video switcher is slated for release in 2014, and is being unveiled for the first time in Japan at this Inter BEE. HVS-2000 is an all-in-one product for live video, suitable for events, live performances, sports, and more. It comes equipped tons of unique features for maximizing switcher performance (MidasTouch, MELite, FLEXaKEY, ONStage, P-MEM, etc.). The machine also supports 4K live production through multi-formatting. For example, using MELite on an AUX2 channel, you can perform transitions like cut, mix, or wipe, as well as keying operations all while monitoring on a preview. FLEXaKEY enables 4-channel key free assignment to M/E1, M/E2, or AUX. Used alongside P-in-P display and MELite on an AUX bus, it can be employed as an upstream key. ONStage enables operations for MELite equivalent to M/E sequences on the control panel. It also allows independent directing for several displays by converting all MELite outputs either simultaneously or separately, or simultaneous control of all displays. In addition, using FLEXaKEY, a video wall with multiple linked monitors can be run with only the HVS-2000.

■NewMediaConcierge world premier
FOR-A is also unveiling the latest version of their MediaConcierge file-based solution for the first time ever. The NewMediaConcierge system differs from its predecessor in its focus on the cloud. By turning to the cloud, it provides a production environment for the sharing and use of data and metadata, and SNS-like group management functions. FOR-A board member and FOR-A IBE president Masanori Wada said of the new cloud-oriented MediaConcierge, "It’s not that you just put everything on the cloud. You have to account for emergencies, inputting material into a local environment and on the cloud. However, it’s a ‘hierarchical cloud’ system; those things you want to share, you have to put in the cloud."

Further, the system stores and manages all of the various kinds of metadata—camera metadata that differs depending on the camera manufacturer, media-specific metadata, telop metadata, editing metadata, subtitle metadata—in their respective original layers, and controls them uniformly in a hierarchical database. Because of this, Wada explained, "Not only can we retrieve metadata for export in the same format as when in was ingested, we can also customize it to be exported in a different format in a single process."

NewMediaConcierge also possesses B/W material management functions, telop application support functions, and an SNS-like comment data exchange function, by which comments on materials in public groups, such as a scene that needs to be looked at or character information, can be shared alongside timecode data.