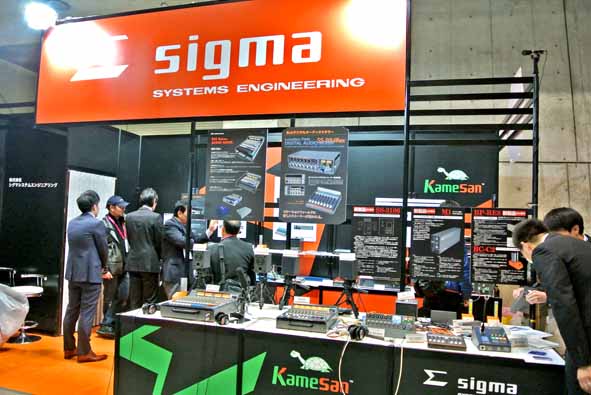 ■SS-3106 intercom box with the diverse functionality made possible by digitization
Sigma Systems Engineering used their Inter BEE 2014 booth to feature the new all-purpose 4by4 SS-3106 intercom box, along with the SS-405 (nicknamed the M1) single microphone amp, the successor to their SS404 MK-II headphone amp, and various mixers.
The 4by4 are a series of all-purpose 4-channel, 4-wire intercom boxes. While existing 4by4 boxes have been analog, the SS-3106 has a digitized matrix architecture. The unit can be operated hands-free using an internal microphone, and is Bluetooth compatible. Use of headsets enables simultaneous communication while limiting crosstalk and increases its compatibility. An optional cascading function also enables 8×8 communication.
Masaki Otawa of Sigma’s engineering crew says of the SS-3106, “This new product should be available to ship in spring 2015. Its ability to send and receive audio from four locations simultaneously will contribute to broadcasting accuracy. A lot of companies are still using analog systems for their audio mixing, and we hope this product will help them accelerate toward digitization. Many of those people are actually attending this exhibition. I got a strong sense that many were concerned about how rapidly things are moving toward digitization.”

■The M1 NiMH battery powered mic amp
The M1 (SS-405) single microphone amp is a slimmed down version of the SS-404 MK-II. It comes with a new monitor out terminal for convenient sound checking, and can operate on a nickel-metal hydride battery. Its accurately displayed power remaining indicator also helps elevate operational efficiency. New functions include an automatic power source conversion circuit, a mini-jack for monitoring, and a signal indicator.
(***Report on products exhibited at Inter BEE 2014, held November 19th thru 21st at Makuhari Messe)