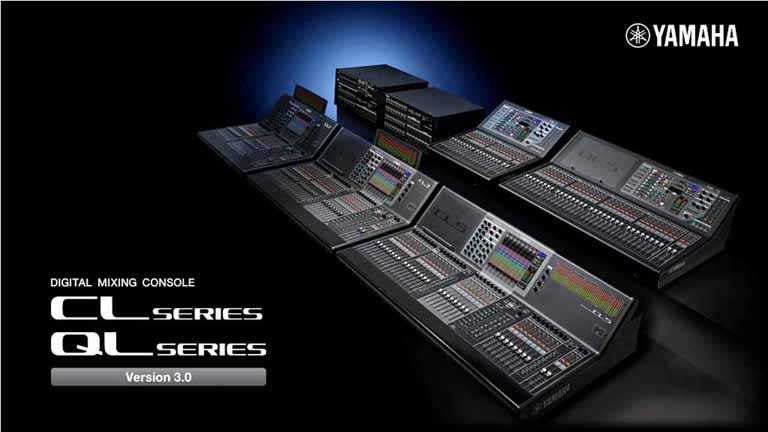 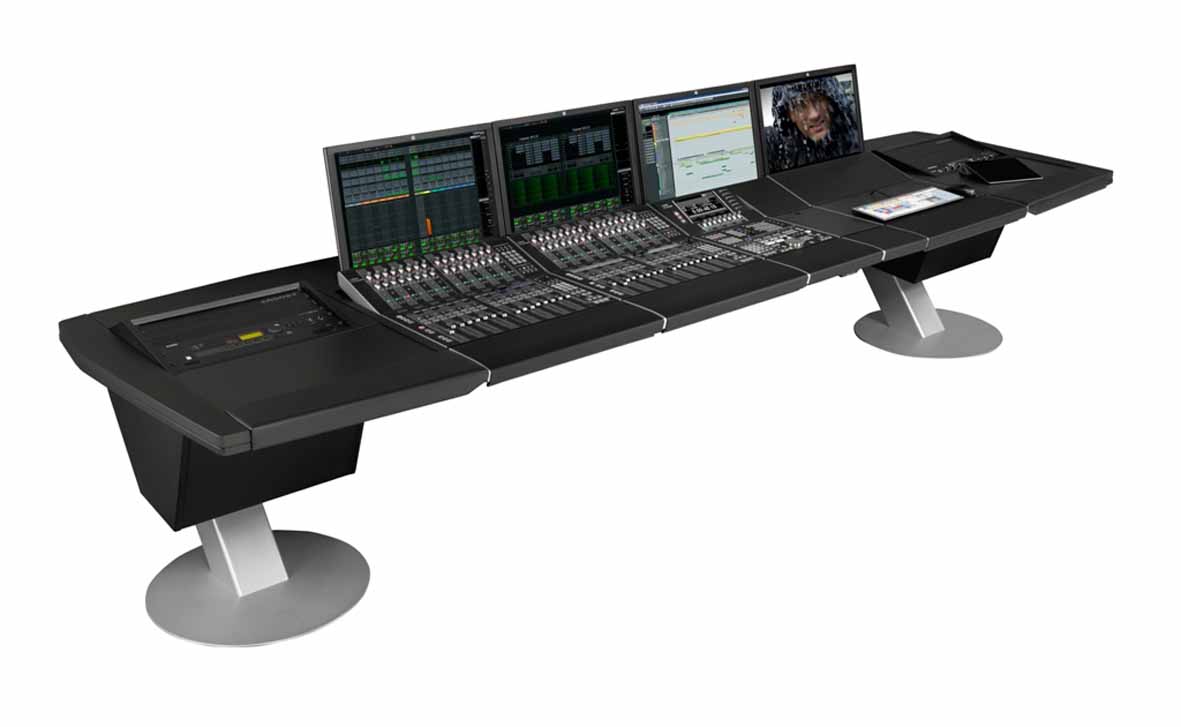 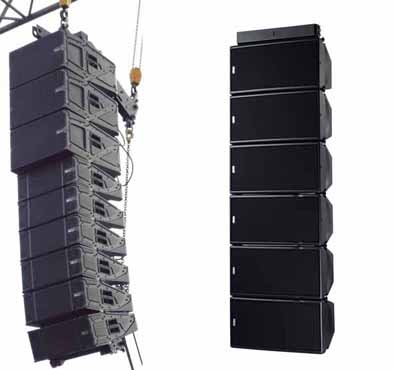 Yamaha Music Japan (Pro Audio, #1216) has further strengthened synergy with its group companies Steinberg and NEXO, and exhibited live sound products from Line 6, a newly added member to the Yamaha Group this year. Each brand's product group is linked through an advanced digital audio network to provide an ideal comprehensive solution, covering "sound, from entrance to exit", all the way from live sound to broadcast and through to post-production.
(Photo above: 2015 Release New CL/QL Series Version 3.0 Digital Mixer)

- QL Series
This all-in-one digital mixing console is condensed from the elements that form the core of the high-end CL Series models. It is equipped with processing functions capable of producing versatile and highly pure, natural sounds. It achieves smooth operation with its Touch and Turn functionality. Equipped as standard with the Dan Dugan automatic mixer and providing standard support for Dante, it is scalable, with the ability to adapt to large-scale and small-scale systems.

- CL/QL Series Version 3.0
A number of features needed for broadcast and live sound have been added. As features mainly intended for broadcast, it is equipped with 5.1 Surround Panning/Monitoring, classic compressor for broadcasters and recording studios, and Buss Comp 369 modeled with VCM Technology. New features mainly for live sound were added to improve the operator's operating environment, including 8 band PEQ and a Real Time Analyzer. In addition, the CL Series is newly equipped with a Dugan automatic mixer. It should be noted that these products were reference exhibits. The official release is scheduled for 2015.

- RMio64-D
This product supports Dante/MADI conversion and can be utilized for a broad range of applications, from live sound and broadcast to post-production. Its MADI input/output is equipped with SRC and enables interconnectivity between systems with different word clocks. It supports a 192 kHz sampling frequency and achieves high compatibility with Nuage systems. It also supports redundancy connections with Dante/MADI ports. Release is scheduled for December 2014.

- MG Series
This analog mixer features a rich lineup from 6 channels to 20 channels. There is a UX model, equipped with SPX multi-effects and USB audio interface functionality, and a standard model. It achieves high sound quality with its D-PRE discrete Class-A mic pre-amp that employs an inverted Darlington circuit. It is equipped with a 1-knob comp that enables complex processing with a single knob.

- MA2030/PA2030
This robust Class-D power amp is compact and suited for small-scale commercial spaces. Its features include a user interface that is simple to setup and operate. It also enables switching between low-impedance (3Ω/4Ω) and high impedance (100v line / 70v line). The MA2030 is equipped with a feedback suppressor, ducker, and auto-leveler.

- Nuendo 6.5
Nuendo 6.5 has a revamped mix console and high-end channel strip, and is equipped with the IOSONO Anymix Pro cutting-edge surround plug-in. In addition, it is equipped with an ADR system optimized for voice recording and dubbing. Its audio post-production work environment has been greatly enhanced with the integration of a loudness measurement feature, installation of Voxengo Curve EQ -an interface with further accelerated editing-, MemZap functionality, and Pro Sound Effects post-production library.

- NUAGE
This DAW system was created through collaboration between Steinberg and Yamaha. Its strengths include a great sense of integration with the Nuendo DAW software and high operability. It employs Dante for its sound transmission standards. It has a component-based structure that enables flexible combinations to suit various systems environments. It also includes various new features to meet the needs of post-production, such as Nuendo 6.5 function control and ProTools interactivity. It also enables a high level of connectivity with Yamaha equipment, such as the R series and AD8HR remote control.

- WaveLab 8.5
Using standard OS folders, WaveLab 8.5 is capable of doing audio file processing and rendering through automated offline processing via drag-and-drop. It is also capable of simultaneous rendering in multiple audio file formats. In addition, it can conduct A/B/C comparisons without sound quality latency through settings and codecs such as MP3, AAC, and OGG Vorbis. It also supports direct exporting to AAC format, supported by Apple products such as iTunes, iPhone, and iPad.

- UR Series
This USB 2.0 audio interface was developed jointly by Steinberg and Yamaha. Its product lineup consists of four models suited to different applications. It enables high-quality D-PRE mic pre-amps and latency-free monitoring.

■ Announcement of new module in NEXO's flagship speaker, the STM Series
The NEXO brand's exhibition centered on the new module STM M28 in the STM Series of NEXO's flagship speakers, which are suited to a wide variety of applications with high flexibility and scalability to support venues from hundreds of people to tens of thousands of people, as well as on its new GEO M6 speaker that condenses NEXO's technology into a compact cabinet.

- STM M28
This omni-module maximizes the STM Series' superb scalability. It supports a wide range of sizes, from downfills for large-scale systems to main arrays for small and medium-scale systems. With HRW™ GEO technology, it achieves optimal coupling of high-frequency ranges. In addition, it employs a Ketone Polymer diaphragm (2.5" x 2) equipped with low distortion and high durability in high-frequency ranges, and a high-excursion driver (8" x 2) in the low-frequency range. It achieves excellent sound pressure in a compact unit.

- GEO M6
This model is suitable for any application with excellent acoustic performance for permanent or temporary installation. There are two models: the GEO M620 full-range module and GEO M6B low-frequency extension module. A rich variety of options are available to support line arrays, pole mounts, wall mounts, and truss rigging. The unique rigging system achieves a safe rigging mechanism that does not depend upon enclosure strength.

■ High Volume Demonstration at the 50th commemorative Inter Bee Experience event
The company will also exhibit at the 50th commemorative Inter Bee Experience event to be held on Thursday, November 20th at 10:30 in the Makuhari Messe Event Hall. This will be the first hands-on demonstration of hanging line speakers from the participating acoustics companies at an exhibition in Japan. This high volume demonstration will enable to experience the performance of the speakers across the event hall's vast space.
This will be a two-part event. In the first part, there will be a line array speaker demonstration of NEXO's flagship STM Series speakers. The demonstration is planned from 2:50 pm - 3:20 pm.
In the second part, there will be an Anniversary Live Party of live entertainment originating from Japan and aimed for the rest of the world, created in collaboration with Rhizomatiks, a content creator that has been the subject of national and international attention. The CL Series and STM Series digital mixing consoles will be used at the venue. The demonstration is planned for 5:40 pm - 7:40 pm. Entry is free but registration is required (for both Session 1 and Session 2).