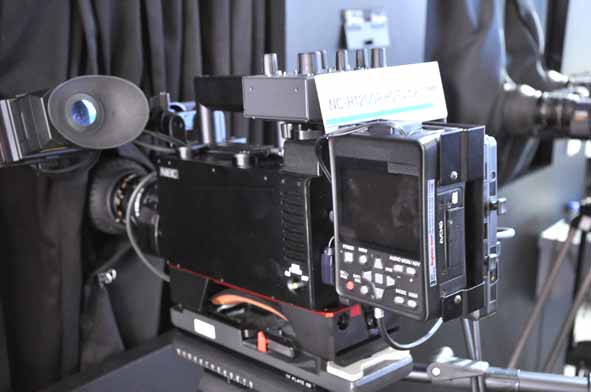 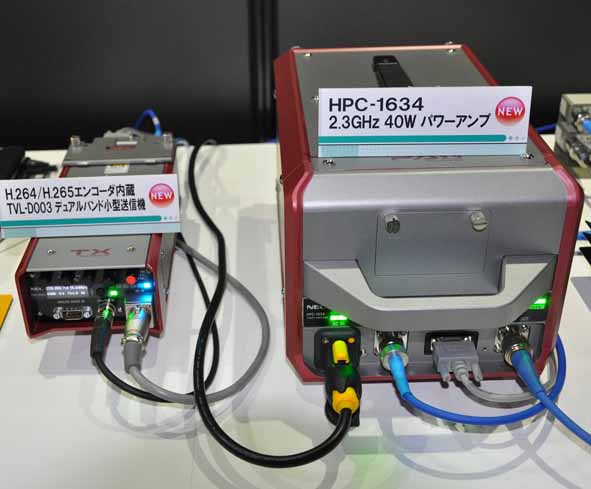 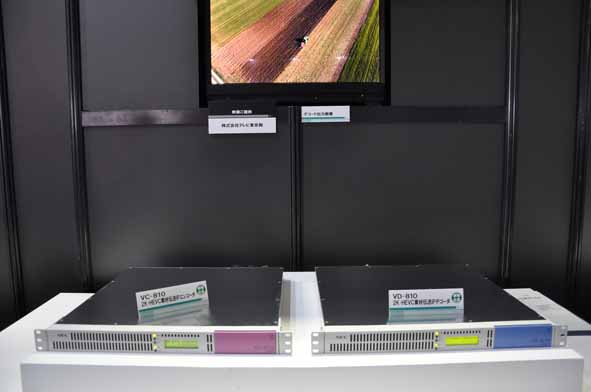 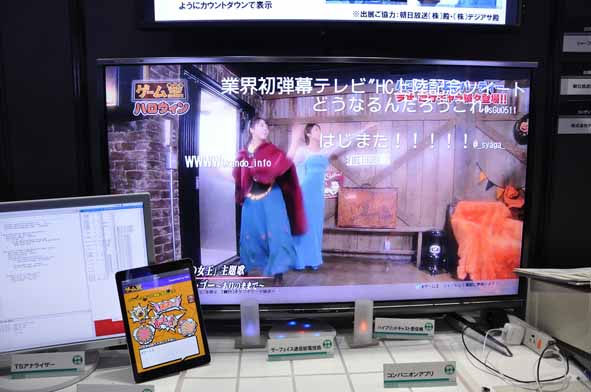 NEC exhibited at InterBEE 2014, and put on reference exhibitions of its new "TVL-D003" FPU device with dual band support, its new "NC-H1200P" ultra-high sensitivity camera, and its 2K HEVC codec device "VC-800/VD-800." In addition, as the next phase in hybridcasting, which was broadcast by the Asahi Broadcasting Corporation on October 24th, they gave a demonstration that achieved broadcasting of hybridcast content with only broadcast-bandwidth waves.
(Photo above: "NC-H1200P" Ultra-high-sensitivity highly portable camera.)

■ New smaller version of "TVL-D003" dual-band small FPU device exhibited
Last year, the "TVL-D003" 1.2 GHz / 2.3 GHz dual band compatible small version FPU device was exhibited as a reference exhibition. Its transmission method is OFDM, its modulation method is BPSK/QPSK/16QAM/32QAM/64QAM/DBPSK/DQPSK, and its output power is 0.5 W (When used with external power amplifier, the output power is 25 W (1.2 GHz), or 40 W (2.3 GHz)). Its video format is HD/SD, and its video encoding can be both H.264 and MPEG2. In addition, its voice interface is equipped with four analog channels and eight embedded channels. It can also be equipped with H.256 / HEVC.

■ "VC-800/VD-800" 2K HEVC codec device exhibited as a reference
NEC put on a reference exhibition of the "VC-800 / VD-800" 2K HEVC codec device currently under development. This 2K HEVC codec device is an HEVC hardware codec, equipped with its own high image quality algorithm. The supported HEVC profiles use Main @ Level 4.1 and Main1 @ Level 4.1. Its input interface is HD-SDI and its output interface is DVB-ASI and MPEG2-TS over IP (RTP). It supports control information between broadcasting stations, digital closed captioning, time coding, and equipment monitoring information as ancillary data. The exhibitor said, "It is currently 1U size, but when it is commercialized, we hope to make it into half-rack size." In addition, Mitsuhisa Tsuchiya, the Executive Director of the Broadcast and Media Division, said, "In the future, we will reduce the size of the HEVC codec board and equip the FPU board with it."

■ "NC-H1200P" ultra-high-sensitivity highly portable camera with enhanced mobility exhibited
NEC, with its long track record of high-sensitivity cameras, exhibited its new "NC-H1200P" product in the "NC-H1200" series of ultra-high-sensitivity color cameras at this year's Inter BEE. The "NC-H1200P" is a portable camera with enhanced mobility, equipped with battery operation, view finder, and handy remote control, based on the 'NC-H1200iR' equipped with 'IR-PASS functionality' to increase sensitivity, that can record light in the near-infrared wavelength band region in addition to visible light. It allows 30 frames and 60 fields. It is planned to go on sale next year.

■ Real-time demonstration on a television screen of hybridcast displaying Twitter comments
NEC gave the industry's first exhibition of commercial integrated hybridcast using the program "Game King Haloween - And the Devil Flew Down?!" which was broadcast by Asahi Broadcasting Corporation between 1:34 am and 2:34 AM on Friday, October 24th (Kansai Local). Within the program, Twitter comments were displayed in near real time on the television screen, with text overlaying the TV program like on the popular Internet site, Nikoniko Doga. In the booth, they held a demonstration of the hybridcast which was conducted on October 24th (which transmitted the broadcast and data along separate routes) and phase 1 of the hybridcast that transmits content of the hybridcast with only broadcast waves. It was explained that in the broadcast, that NEC "conducted a test to display NEC event information, feedback from viewers about the commercial, stamps, and multiple choice questionnaires during an NEC commercial."

■ Reference exhibition of image processing technology and scoop detection technology
NEC put on a reference exhibition of new image processing technologies and scoop detection technologies. The image processing technology can follow positions in real time and split Chroma key cuts. If Chroma key is used during a program, the background appears unnatural when the camera moves, such as for zooms and pans. Therefore, NEC developed a system that uses image processing technology to follow positions in real time and split Chroma key cuts in response to camera movements. Mitsuhisa Tsuchiya explained, "Conventional virtual reality systems are expensive, but this was developed in collaboration with the hosting TV company to be a system that can easily be used without sensors and just one computer." In addition, the scoop detection technology can quickly detect tweets about incidents and disasters being discussed on twitter and communicate them to the media. The trial version is already under development, and they plan to test it for several months next year.
In addition, they exhibited digital audio consoles and a loudness controller jointly developed with Mainichi Broadcasting System, a "2K/4K/8K optical wavelength division multiplexing transmission system" equipped with a light transmission unit that supports 2K/4K/8K, the "HSMX-5000" routing switcher that supports 4K, and the "VSP-X1000 CC" colorimetry converter that supports 4K broadcasting systems.