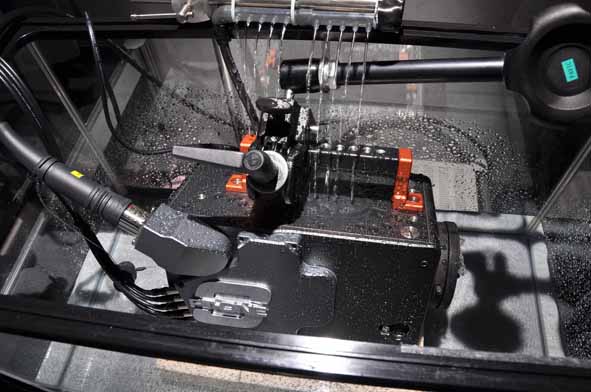 Demo of the waterproof capability of the new FT-ONE-S

FOR-A (HQ: Shibuya, Tokyo) chose its InterBEE 2014 booth as the venue for the world debut of the FT-ONE-S, the latest model in its 4K high speed FT-ONE series. FOR-A also chose InterBEE for the first showing of its new HBC-2000 2.07 million pixel Full HD/60fps ultra high sensitivity camera (pictured above), which is scheduled for release in spring 2015.

■ World debut of FT-ONE-S, a new compact, detachable head FT-ONE model
The FT-ONE-S, boasting all of the strengths of the FT-ONE 4K high speed camera in a new compact and convenient model, made its world debut. The FT-ONE-S camera head is detachable, connecting to a base station via fiber optic cable. It weighs approximately 5.5kg and has dimensions of 180mm (W) x 197mm (H) x 290mm (D). It has a PL mount and is equipped with a super 35mm sensor. FOR-A demonstrated the new camera’s dust and water resistance capabilities at its InterBEE booth. A base station is also under development, but could not be finished in time for InterBEE. Chihiro Ogawa from the company’s planning and PR group explained that the FT-ONE-S “has a high all-purpose frame rate of 360fps that makes it great for live sports broadcasting in 4K.”

■ FLOVEL HBC-2000 2.07 million pixel Full HD/60fps ultra high sensitivity camera make debut at InterBEE
The new HBC-2000 ultra high sensitivity HDTV camera, with 2.07 million pixels and Full HD/60fps also made its debut at Inter BEE. The camera employs a 2/3-type 2.7 million pixel CMOS sensor, supporting HD image quality with a single panel. The CMOS sensor drastically reduces noise from horizontal pulling. It is also capable of shooting color video of a subject with as little as 0.005Lx illumination. “Shooting a subject with intense movement at 30fps is quite difficult, but our emphasis on picture movement with 60fps support has enabled full color shooting day or night,” says Ogawa. The HBC-2000 is slated for release in spring 2015.