Inter BEE 2018: IDK to exhibit NJR-01UHD from its IP-NINJAR series of AV-over-IP solutions alongside other products with a 32-screen multi-display demonstration 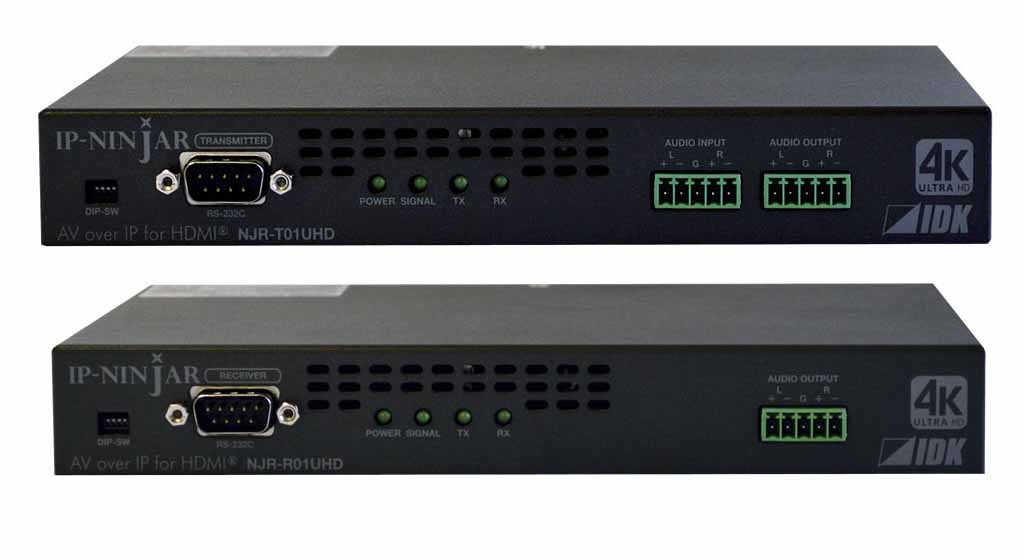 The new NJR-T01SDI for SDI AV-over-IP

The four-screen compositing processor ICP-401UHD, which supports 4K at 60hz and HDCP 2.2

The digital multi-switcher MSD-802UHD, which supports 4K at 60hz and HDCP 2.2

IDK Corporation, which is celebrating the 30th anniversary of its founding, will participate in the Inter BEE 2018 exhibition to be held from the 14th (Wednesday) of November 2018 to the 16th (Friday) at Makuhari Messe. The 32-screen multi-display demonstration in their booth will center on the NJR-01UHD from the company's IP-NINJAR series of AV-over-IP solutions. The NJR-T01SDI (a new transmitter from the same series for sending SDI signals over IP networks), the FDX-08 (a new digital matrix switcher), an SDI input slot board for the FDX series and other products will also be exhibited.

■ The first exhibition of the NJR-T01SDI, an AV-over-IP solution for SDI
The devices in the IP-NINJAR series of AV-over-IP solutions allow for transmission of full specification 4K (4K at 60Hz, 4:4:4) video and full HD video over IP networks via fiber-optic cables. At this year's Inter BEE, IDK's 32-screen multi-display demonstration will focus on the company's 4K-compatible HDMI AV-over-IP solution NJR-01UHD. The company's new AV-over-IP device for SDI, NJR-T01SDI, will also be exhibited for the first time. It is due to be released in January 2019.
(The above photograph shows the 4K-compatible AV-over-IP solution NJR-01UHD. Top: The NJR-01UHD's transmitter, NJR-T01UHD. Bottom: The NJR-01UHD's receiver, NJR-R01UHD.)
The NJR-01UHD is an HDMI network extender that enables long distance transmission of HDMI signals via fiber-optic cables or twisted pair cables. It supports 4K at 60Hz and HDCP 2.2. NJR-T01SDI is an SDI network transmitter that enables long distance transmission of SDI signals via fiber-optic cables. For SDI input, it supports 3G-SDI, HD-SDI and SD-SDI. When using a single-mode fiber cable (OS1) with the 10G-SM-SFP module, the IP-NINJAR series of AV-over-IP solutions can transmit signals over a distance of up to 10km.

■ Exhibition of the FDX series of digital matrix switchers, which supports a new line of SDI input slot boards
The FDX series is a line up of HDCP-compatible matrix switchers designed for digital signals.
The SDI input slot board to be released in November 2018 will be compatible with the already released FDX-16/32. The FDX-08, which supports eight inputs and outputs, will also be released in November. It supports four SDI inputs, and 3G-SDI, HD-SDI and SD-SDI inputs can be mixed together.
The maximum extension distance of the SDI cable is 140m with a L-5CFB coaxial cable (or equivalent) for 3G-SDI signal input, 240m with a L-5CFB coaxial cable (or equivalent) for HD-SDI signal input, or 300m with a L-5C2V coaxial cable (or equivalent) for SD-SDI signal input. With the FDX series, the video signals of an SDI camera, which are traditionally input via an SDI converter, can instead be input directly.

The booth will also feature the FDX-UHD series of digital matrix switchers released in June of this year.
The four-screen compositing processor ICP-401UHD, which supports 4K at 60Hz and HDCP 2.2, will also be exhibited. It is set to be released in February 2019. Additionally, the MSD series of digital multi-switchers will be demonstrated. The MSD series has been used to great success for video wall controllers, as well as systems for educational/business meetings, lecture halls and exhibitions.