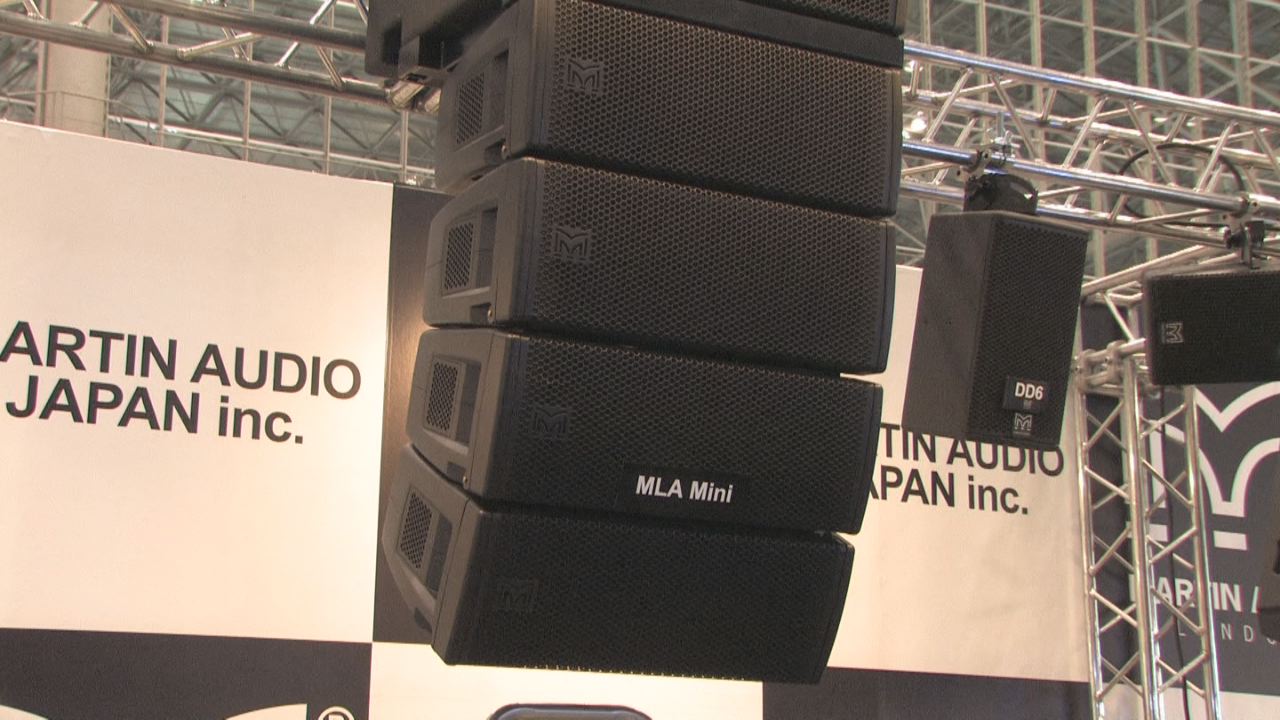 Based on a theme for their booth of “introducing professional audio products showcasing the latest in cutting-edge technology,” AUDIO BRAINS (booth: 4306) is exhibiting a range of the newest pro audio products sold by their company. They will be showcasing the latest products from Martin Audio, AVID, APEX, PCE, d&b, and more.
The company plans to exhibit the Martin Audio MLA Mini, the latest product from the Martin Audio MLA series; the AVID S3L System, the latest mixing console from AVID; PCE CEE Form Connector power connectors, which have been highly recommended for audio use; the APEX Intelli-X2 digital signal processor, which has new FIR features; and more.

■Appealing to a wider market with a miniature MLA
The Martin Audio MLA Mini is a new, small-sized version of the Martin Audio MLA series that has attracted attention in recent years, and is being exhibited for the first time in Japan. In contrast to the conventional line array concept, the MLA series utilizes speakers (cells) that operate independently, together with computer control technology (MLA is short for Multi-cellular Loudspeaker Array).
Line array speakers, which came onto the scene roughly 15 years ago, dramatically reduced the space required by the speaker systems used in live venues, and enabled easy vertical coverage. In addition, the conduction of simulations yielded improvements such as a reduction in sound pressure differences.
However, in extremely large live venues, variations in audio quality within the area of coverage according to the listener's location were unavoidable. Extremely large live venues have audience seating 10m away from the stage as well as 100m away, and creating identical listening experiences at both distances was impossible. Furthermore, other issues remained, including differences arising between the results of simulations and the reality at actual performances, as well as difficulty in changing the directionality of the speaker system following setup, and an inability to control reverberation.
With regard to these issues, the use of MLA has been measured to reduce the roughly 20dB of difference in sound between seating in the front row and the rear of a traditional hall to a mere 3dB of difference. This can be described as a lack of degradation of the sound as it travels to the rear of the venue.
This improvement is due to the sound waves produced by each speaker unit, out of 144 comprising a 24-box array, being controlled individually via DSP. MLA technology makes use of the groundbreaking technique of computing the sound produced by each unit based on the ideal listening conditions.
The MLA Mini on display is based on this same MLA technology, and is the next size down following the MLA and MLA Compact. A 12-box array can provide a coverage of 35m, allowing for use in venues that can accommodate 750 to 1,000 people. As a result, in addition to the previous support for giant live stages, the technology can now be used for an even wider range of purposes in terms of both cost and size. The MLA Mini includes simulation software, with approximated values provided as presets. The reduced size and weight also allow for a wide range of installation methods, including pole mounting.