Inter BEE 2013 – Kowa Optical Products' display of their new HDMI switcher, a twisted pair cable extended distributor that can be extended up to 180m, and more 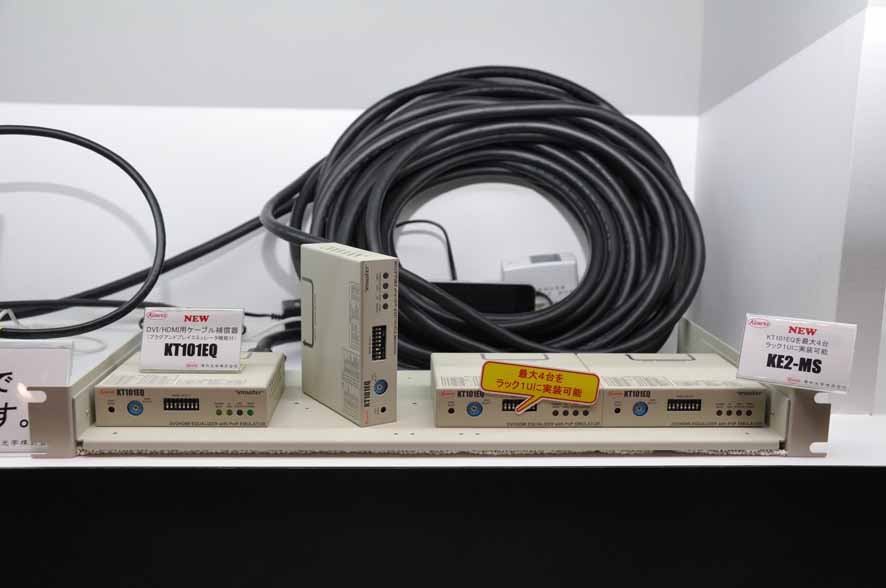 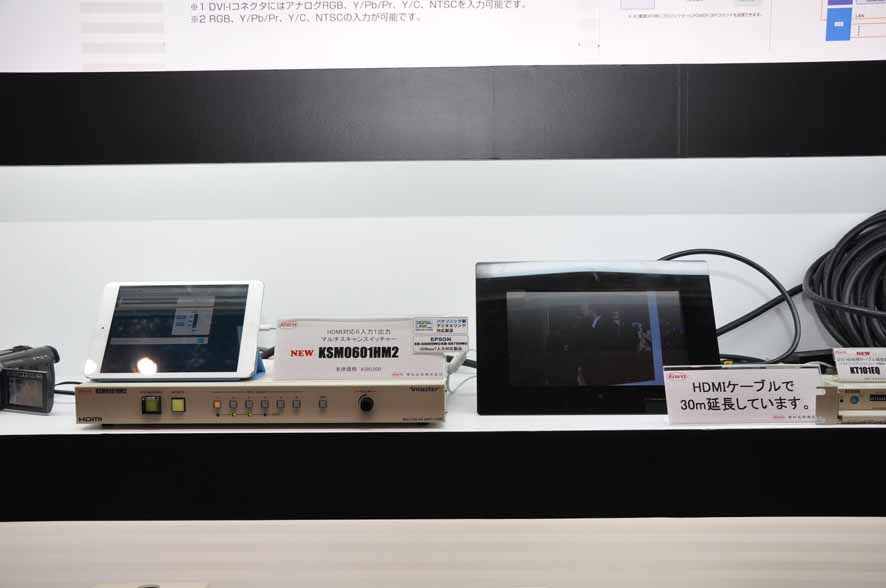 Demonstration of the KSM0601HM2, a HDMI 6-input 1-output multi-scan switcher 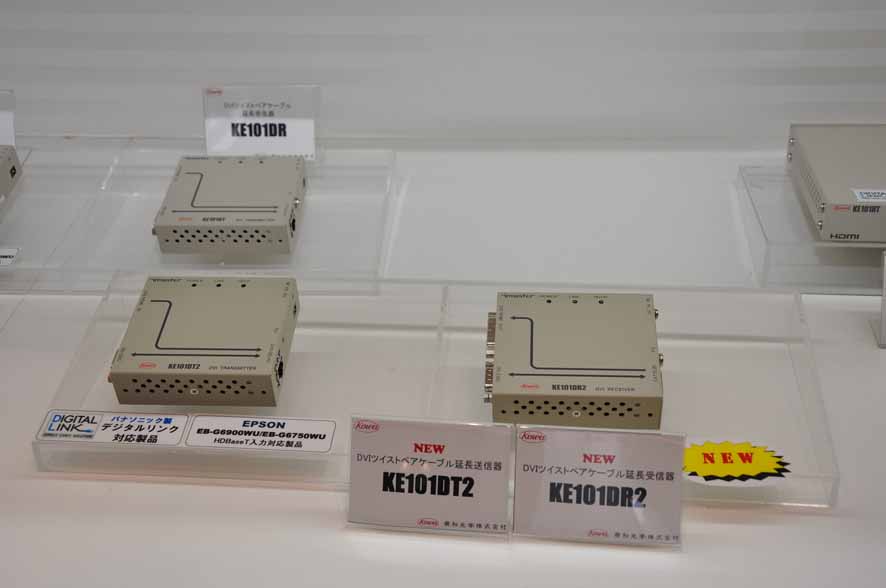 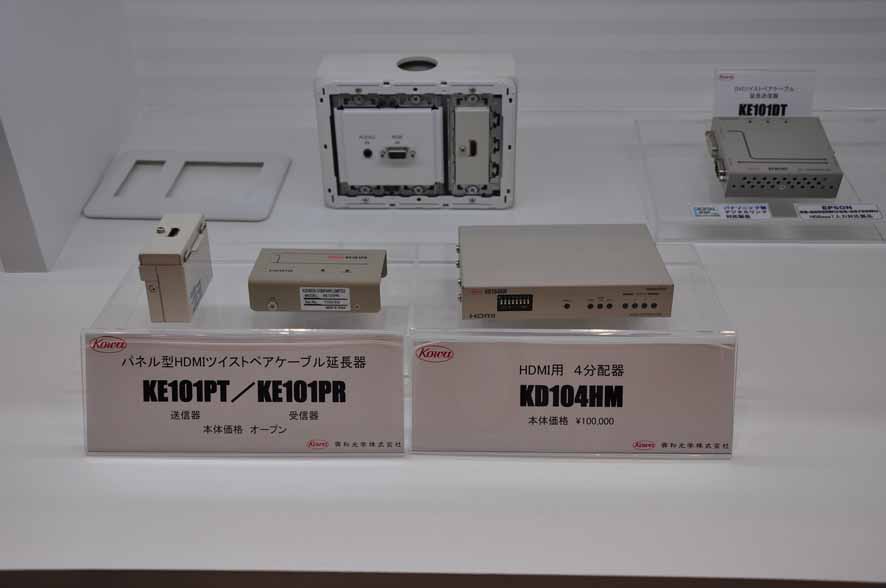 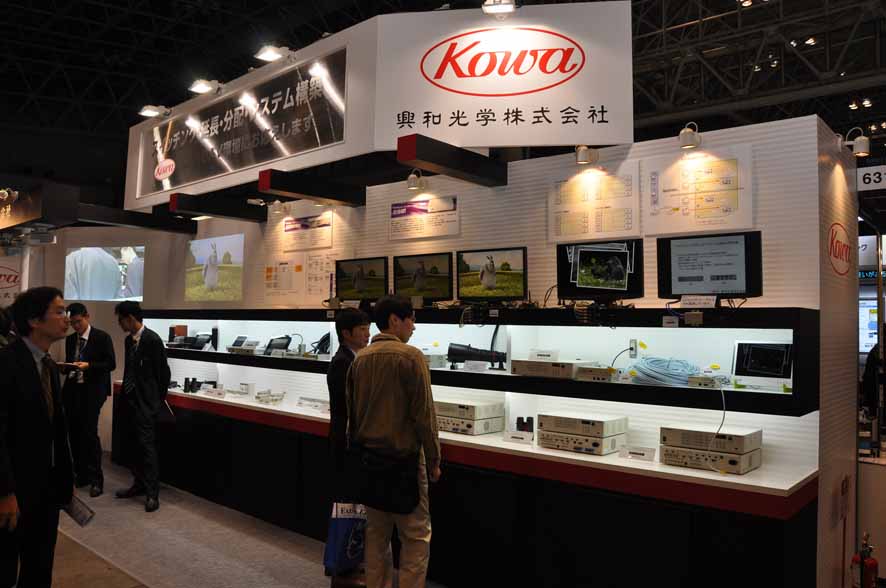 Kowa Optical Products (Room #6311) displayed their new HDMI 6-input 1-output multi-scan switcher, "KSM0601HM2"; their twisted pair cable that allows you to extend a 1080p signal up to 150m, "KE101DT2/DR2"; their "KT101EQ" DVI/HDMI cable compensator with plug-and-play emulator functionality; and other new products at the Inter BEE exhibit (held at the Makuhari Messe in Chiba Prefecture over 3 days, from November 13th through the 15th). At the booth, they held a demonstration in which they fed video into their "KSM0601HM2" HDMI multi-scan switcher and displayed the content through a 30m HDMI cable by way of their "KT101EQ" DVI/HDMI cable compensator (above photo) with plug-and-play emulator functionality.

■ The "KSM0601HM2" HDMI 6-input 1-output multi-scan switcher
The "KSM0601HM2" is a multi-scan switcher that meets HDMI standards and converts composite/YC/component/analog RGB and other analog video signals, as well as HDMI/DVI signals, into a unified HDMI/DVI signal for output. It comes equipped with a scan converter, has fast and smooth input switching, allows for switching between resolutions and aspect ratios, and outputs video and audio signals by distributing them through HDMI and CAT5.D outputs. By connecting Kowa’s twisted pair cable extended receiver for HDMI use, it is apparently possible to extend HDMI and RS-232C controlled signals up to 100m using one CAT5e(STP)/CAT6 cable. In addition, the product is compatible with PJLink and RS-232C external controllers, allowing for power management of up to 8 PJLink-compatible devices such as projectors. Furthermore, the device can be managed from a WEB browser along with front panel and parallel I/O, RS-232C, LAN, and other such external controllers. Moreover, as explained by Mr. Tetsu Kuroda, head of two sections within Kowa’s first sales department, because most projectors, recorders, and other devices with lip-sync over black screen functionality now come equipped with HDMI input compatibility, “use of our products is increasing in universities, high schools, middle schools, and other educational institutions.”

■ The "KE101DT2/DR2" DVI/HDMI twisted pair cable extended sender/receiver
The "KE101DT2/DR2" are a DVI twisted pair cable extended sender and receiver that allow you to extend DVI/HDMI signals up to 180m by using a CAT5e(STP) cable or CAT6 cable to connect sending and receiving devices. The input connector uses DVI input, but it comes with an attached DVI/HDMI converter connector, which allows you to extend HDMI signals. For example, you can extend deep color 1080/60p signals up to 100m, and 720p signals up to 150m (according to Mr. Tetsu Kuroda). The products are poised to go on sale in February of next year.

■ The "KT101EQ" DVI/HDMI cable compensator with plug-and-play emulator functionality
The "KT101EQ" is a DVI/HDMI cable compensator that allows for extension of up to 30m and compensates for deterioration in DVI/HDMI signals extended over long distances by using an equalizer.
The special features of this product, as explained by Mr. Kuroda, are “the fact that it comes equipped with 30 types of EDID data, as well as plug-and-play emulator functionality that allows you to output DVI/HDMI signals from the output device at a resolution level set by you, and the fact that it allows you to easily know when something goes wrong with the signal through various indicators that display the transmission status.” The product is set to go on sale in April of next year.